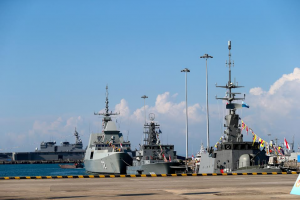 Singapore. 15 May 2017 . All roads converge at Changi Exhibition Centre, Singapore where the who-is-who of the maritime and naval world has converged at the biggest ever IMDEX Asia to to brainstorm and showcase the blue water prowess of not only the Asia-Pacific region but of the world over. The 11th edition of IMDEX Asia is being held this year in conjunction with the Republic of Singapore Navy’s 50th anniversary celebrations (RSN50).

The largest ever gathering of 28 foreign warships from 20 navies in addition to vessels from the Republic of Singapore Navy including the first-of-class Littoral Mission Vessel – the RSS Independence, will be on full view at the IMDEX Asia 2017 Warships Display. 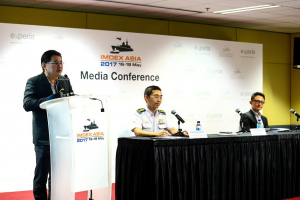 “IMDEX Asia has grown into a key global platform for facilitating the vital discussions that not only address the rising wave of opportunities and challenges in the Asia-Pacific, but also focus on the critical need for regional maritime and naval security & defence cooperation,” said Mr Leck Chet Lam, managing director, Experia Events, organiser of IMDEX Asia 2017. “The strong support and participation from the industry and navies resulting in the biggest IMDEX Asia this year will continue to motivate us as we evolve IMDEX Asia to further enable stakeholders and key industry players from across the spectrum to collaborate on achieving maritime stability and security in the Asia-Pacific region.”

All of these developments underscore the expanding role of neutral platforms like IMDEX Asia in facilitating key discussions around the regional maritime security and defence agenda. The two IMDEX Asia strategic conferences will gather leading experts and academia from around the world to discuss issues related to maritime security and present the latest technologies on naval platform design and developments.

“The Republic of Singapore Navy is glad to again co-organise IMDEX Asia 2017 with Experia Events. IMDEX Asia has grown from strength to strength over the years. Besides the gathering of a large number of trade exhibitors, the event also brings together like-minded navies and maritime enforcement agencies to discuss and build practical cooperation towards enhancing maritime security and a rules-based maritime order at sea.” Said Colonel (COL) Ong Chee Wei, Commander First Flotilla / Commanding Officer Missile Corvette Squadron, Republic of Singapore Navy.