For running the website perfectly ADU has an advisory board which serves as a beacon to keep the website on course and make it professionally the most authentic. ADU is about creating a platform for all stake holders in and get a global visibility. The bio-data s of the members of advisory board is here.

Special sections on special days, about specific armament, equipment, technologies, institutions, organizations, armed forces and related subjects, will always be its endeavor. And of course regular coverage in all formats, be it interviews, features, reports, by-lined articles and editorials both signed and unsigned, will be its pursuit.

Special sections on special days, about specific armament, equipment, technologies, institutions, organizations, armed forces and related subjects, will always be its endeavour. And of course regular coverage in all formats, be it interviews, features, reports, by-lined articles and editorials both signed and unsigned, will be its pursuit. Adhering to our catch line – We just report facts, we don’t change them– ADU has always aimed at journalism at its ethical best.

Sangeeta Saxena is a hands on journalist who loves to travel, report and write. Twenty eight  years of being a part of the media fraternity, covering defence, aviation, international relations and homeland security from Delhi to Calcutta to J&K to North East to Nagpur to Pune to Srinagar to Kargil and back to our very own Delhi—that’s how she has covered the length and breadth of India.
In love with her beat, she has covered operations like Kargil, sieges like Charar-e Sharif, insurgency camps of NSCN(IM) ,  land, naval and airshows world over. After working for news papers and magazines, she has now decided to branch out to the medium of the time-web. As the Editor of the website, she is putting in all her experience and expertise in the field, to make the product state-of-the-art. Armed with a M .Phil. in Journalism, she is in the process of completing her Ph.D. in Defence  Journalism.
Sangeeta Saxena has also authored the book Defence Journalism in India. Defence journalism, though very much a part of modern day journalism, has practically very little literature for reference. This book has a unique distinction of being the first book on defence journalism, with special reference to India. Being a book on information and opinion, it analyses the love-hate relationship between the military and the media. Here the media`s point of view in no war, no peace, low intensity conflict areas have been answered. 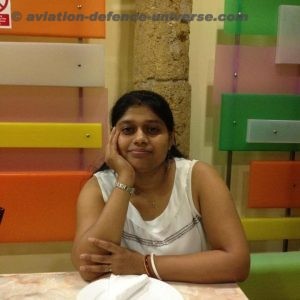 Chaitali Halder Bag  is the Chief of Bureau for Europe & Middle East  since the inception of ADU. She is based out of Calcutta/Kolkata in India. She in journalist who loves the camera and the concept of multi tasking in journalism. For a journalist who is a M .Phil. in Journalism started her career with the Indian Express daily newspaper in Delhi on the  crime beat, graduated  to political beat  and has  been covering aerospace and defence for the past eight years. From Delhi to Abu Dhabi and from there to Cyprus, Chaitali has been covering the armed forces, aerospace and defence industry and home land security.

Her passion is to cover air and defence shows world over. Working for a medium which is instant Chaitali believes in the fact that there are no tomorrows- news is now and so are features, interviews and editorials. So armed with her camera she enters the show to can every moment, every company and every person who matters.

Years of being a part of the media, she is putting in all her experience and expertise in the field, to steer ADU ahead .  All media partnerships in ADU are her responsibility which she is fulfilling well. A professional with academic inclination , she is registered for PhD in mass communication.

Suresh Somasamy is the Chief of Bureau for Asia-Pacific Region. As a journalist, he reports on world events in the region including South East Asian developments, particularly in the areas of defence, aviation and international relations, providing deeper understanding through impartial analysis and commentary.

His subject-matter expertise stems from his ongoing attendance of global events and conferences, where he networks with leaders in industry and carries out interviews and his interest and insight  into international relations.

Somasamy also covers the aerospace, defence and homeland security industry based out of the region. He is also invited off and on  to attend specialist workshops by the industry to understand the products and processes.

Suresh Somu as he is fondly called graduated from the University of Hull.