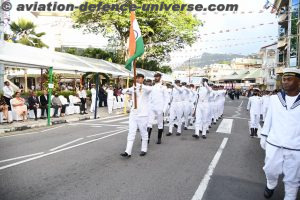 New Delhi. 01 July 2022. The Indian Navy contingent joined the enthusiastic personnel of the Seychelles Defence Force (SDF) and the proud citizens of Republic of Seychelles for the Independence Day celebrations.

INS Kolkata, an indigenously built Stealth Guided Missile Destroyer of the Indian Navy, was deployed to Port Victoria, Seychelles to coincide with the Independence Day of Seychelles on 29 June 22 and was dressed overall to mark the ceremonial occasion. A marching contingent of IN personnel along with Musical Band joined the Military Parade held at the Unity Stadium at Roche Caiman on 03 July 22. The deployment marked sustained participation of Indian Military Contingent in the Seychelles National Day since 1976.

During the port call, INS Kolkata delivered two engines of Dornier Aircraft of the SDF, which were overhauled at Hindustan Aeronautics Ltd (HAL), Hyderabad. A set of engineering spares were also delivered to Seychelles Coast Guard (SCG) for sustenance of SCG ships. INS Kolkata hosted a large number of visitors and school children who were delighted to witness, first hand, the capabilities of this modern Destroyer of Indian Navy. Yoga enthusiasts at Seychelles enjoyed the unique experience of a Yoga Session on the deck of the ship.

SCG personnel embarked INS Kolkata from 29 June to 03 July 22 to conduct joint Surveillance operations in the Exclusive Economic Zone (EEZ) of Seychelles along with Dornier Maritime Patrol Aircraft of Seychelles Air Force. During this phase, the ship facilitated operational training of SCG personnel to complement the ongoing training support provided by Indian Navy.

Long standing bilateral defence relations between India and Seychelles had received a positive boost after recent visit of Adm R Hari Kumar, Chief of the Naval Staff to Seychelles in April 2022. The deployment of INS Kolkata to Seychelles for participation in National Day celebrations, delivery of technical assistance and substantial operational interactions with Seychelles Defence Force during this deployment, has further raised the scale and scope of bilateral defence engagements.

Deployment of INS Kolkata was in consonance with vision of SAGAR which promotes collaborative efforts to ensure maritime security in the Indian Ocean. To this end, India remains committed to providing sustained support to capacity building & capability enhancement efforts of all maritime littorals of the Indian Ocean.