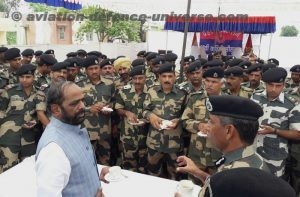 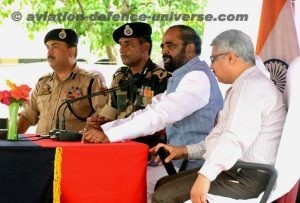 Ahir also had an interaction with Jawans to know about their well being. He was overwhelmed and impressed by the enthusiasm and spirit of the BSF troops during the interaction. He appreciated the BSF troops in effective neutralization of three militants in Chamliyal area, who infiltrated through tunnel last year. He further apprised the jawans that the Government recognizes their contribution towards national security and is always eager to address their concerns.

It may be recalled that earlier this year  BSF has detected a 20-meter long tunnel along the border with Pakistan in Samba district of Jammu and Kashmir, thus foiling possible infiltration of militants into the State. And as the Visit was finishing the mood was retaliatory as just a few days back Pakistan had resorted to unprovoked ceasefire violation and fired four 51mm mortar and two 81mm mortar shells towards the forward Indian posts in Dewra village of Rajouri’s Sunderbani district to which the jawans retaliated strongly and shot dead at least three Pakistan Rangers. BSF feels hostile action between the two sides along the IB has been witnessed after a long time.