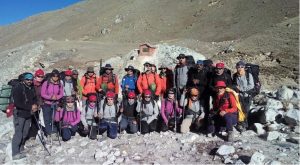 New Delhi. 02 May 2016. This is another feat for girls of National Cadet Corps (NCC) Girls. Expedition to Mt Everest that was flagged-off by Minister of State for Defence Rao Inderjit Singh on 09 Mar 2016 reached the base camp of Everest in Nepal on 21 Apr 2016.
The team led by Col Gaurav Karki had reached Kathmandu on 31 Mar 2016. The ten girls, scheduled to summit the peak between 15 May to 25 May 2016 tracked for 156 kilometres of tough terrain from Jiri to reach the Everest Base Camp.
The team has trained hard for the Mt Everest Mission. Pre-Everest Expedition to Mt Deo-Tibba (19688 ft), near Manali in Himachal Pradesh was conducted for 40 cadets in Apr-May 2015. 15 cadets were selected for the next phase based on their performance. In Aug 2015, the team set off on second Pre-Everest Expedition to Mt Trishul (23360 ft), and helped in selecting 10 girl cadets for Everest Expedition. These ten girls thereafter did a month long winter training in Siachen glacier.