Boeing Celebrates 100 Years by launching a Second Century of Innovation 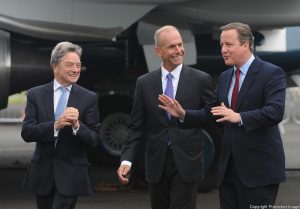 Seattle/Farnborough.  July 15, 2016. Twenty employees rang the opening bell at the New York Stock Exchange at 9:30 a.m. Eastern today. They represent the multiple generations of families who have worked at the company over the years.

The Boeing Company today celebrates 100 years since its founding on July 15, 1916, marking a legacy of connecting and protecting people and nations, exploring Earth and space, and inspiring dreamers and doers alike through its products and services.

“The innovative spirit of our founder Bill Boeing — who 100 years ago today dedicated this company to building something better — is alive in the generations of our people who continue to deliver products and services that matter and positively change lives around the world,” said Boeing Chairman, President and CEO Dennis Muilenburg. “As we embark on our second century, our commitment to excellence is stronger than ever, our potential for achievement is as great as it was for our founders, and our goals must be even more bold, visionary and inspiring,” he added.

“We have won for 100 years because of innovation. The key is disciplined innovation. We’ll take risks. We’ll invest smartly.We are exploring the possibilities of commercial supersonic and hypersonic planes. I’m anticipating that person will be riding on a Boeing rocket,” Muilenburg said.

” The company also is still working on plans for a “middle of the market” aircraft that could fill a gap in its product line between the 737 and the 787. We might use existing products, derivatives of existing products or an all new airplane to fill the gap. If it’s an all new airplane, we think that would probably be in the 2024-2025 time frame in terms of when it would be introduced into service,” he said.

Muilenburg spoke with reporters at the beginning of a celebratory weekend of events for an estimated 100,000 employees, families and retirees at Boeing Field in Seattle. 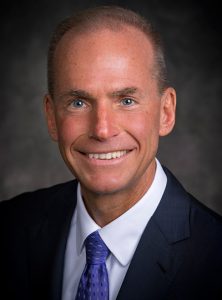 “ Boeing is stronger now than at any point in its 100-year history. It has a backlog of 5,700 plane orders, enough to keep its factories humming for six or seven years. Beyond filling those orders, we aim to sharpen and accelerate its innovation, in plane design in the factory and services. This includes second-century design in manufacturing, automation, 3-D printing, additive manufacturing,” he said.

“Even though we’re arguably the best aerospace company in the world today, we have to continue to invest in innovation,” he said.

Boeing is entering its second century by launching 100 Days of Learning. Kicking off today, this educational campaign aims to inspire the next generation of aerospace visionaries by providing teachers and students with free education resources that were co-created by Boeing engineers and leading educational content providers.

A lineup of Boeing’s famous 7-series airplanes and a static display of historic aircraft will be part of the Founders Day weekend celebration for employees in Puget Sound, near the company’s birthplace. Other highlights include a light show projected on the body of a 747 and a festival at the Museum of Flight.

The global interactive flight and space education exhibition opens today in Nagoya, Japan, joining London and Seattle for concurrent engagements; since launching in July 2015, the exhibit has had nearly 3 million visitors.

Age of Aerospace,the documentary series chronicles aerospace history through the evolution of Boeing and its heritage companies. Broadcast around the world and available in 18 languages, the series debuts today for the first time in France .

Centennial Experience pavilion , a special exhibition telling the innovation story of Boeing’s past, present and future is open to the public at the Farnborough International Airshow this weekend outside London. The Boeing Innovations app, available in iTunes and Google Play, features Boeing products with interactive, 3-D models.

Boeing today represents a number of major companies that have merged over the past century, including McDonnell Aircraft, Douglas Aircraft, North American Aviation/Rockwell, Piasecki/Vertol, Howard Hughes’ helicopter and space companies, Stearman and The Boeing Company. 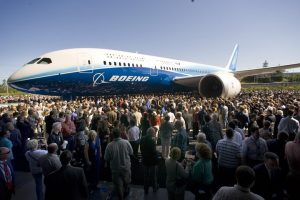