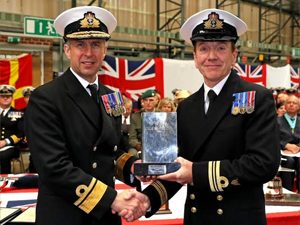 The inspection was conducted by the office of the Assistant Chief of Naval Staff – Aviation and Carriers (ACNS-A&C) for the Royal Navy. The Admiral’s team conducts annual reviews and recognizes the squadron delivering an exceptional level of training to Royal Navy frontline crews by awarding the Breitling Trophy.

“This is a well-deserved honour for the instructors supporting the training of Royal Navy Lynx aircrew, and achieving an exceptional grade demonstrates the high-level of training delivered at RNAS Yeovilton,” said Chris Bunn, Project Manager for the Flight Simulation and Synthetic Trainers (FsAST) Project Team, UK Ministry of Defence. “The Royal Navy instructors and those of us on the FsAST project team acknowledge this recognition and winning the Breitling Trophy would not have been possible without the high-quality synthetic training equipment and ongoing support provided by CAE,” he added.

“We congratulate all the Royal Navy instructors at the Lynx Simulator Facility at Yeovilton on this great accomplishment of winning the Breiting Trophy,” said Ian Bell, CAE’s Vice President and General Manager, Europe/Middle East/Africa. “At CAE, our objective is to help our customers achieve the highest levels of safety, efficiency and readiness, so we are pleased to play a role in helping the Royal Navy Lynx aircrews reach this high standard of training.”