View All
Home › Salute To Soldiers › Lance Naik Suresh Karki : The Story of a True Champion

Lance Naik Suresh Karki : The Story of a True Champion 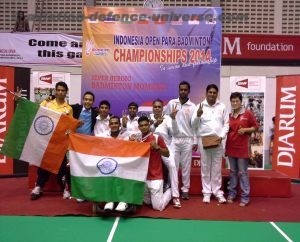 Wiping the sweat off his brow, Suresh glances at the referee. ‘Game Point -17’ announces the referee, signaling for Suresh to serve. Suresh steels himself, if only he can hold his serve and see this through. His opponent postures, Suresh serves, bracing himself for the return.  His opponent attempts to test his backhand, Suresh angles his racket and sets himself up for a graceful smash…..spectators cheer.. the match is over!Suresh sinks down unbelievingly, letting go of his racket, his mind spinning, Completely drained, Suresh buries his face in his towel and sobs… He can hear the scream, the sounds of shattering glass, the smell of burnt rubber and spilt diesel. He can almost feel the jarring impact… followed, always followed by that sinking feeling of despair. The sense that his life is spiraling out of control. That was ten years ago.

July 7th 2004 , Lance Naik Suresh Karki checks his equipment. He is part of a ‘Medi vac’ Mission’. A soldier from a neighbouring battalion has sustained a gunshot wound and is losing blood. A trained BFNA (battle field nursing assistant), Suresh and his comrades have been asked to evacuate the casualty to the Base Hospital in Guwahati. A quick route assessment is carried out. Assam, at this time of the year, is reeling under floods. The team decides to cross the swollen Brahmaputra and travel through Goalpara District.

Suddenly, out of nowhere a truck comes hurtling down the road and smashes into the ambulance. Suresh is thrown out…his eyes open for a brief second and he sees Ganga Bahadur’s crushed torso next to him. He stares unbelievingly at his own mangled legs and touches them gingerly, feeling wet sticky blood oozing out. Then he feels a wave of excruciating pain. Then numbness. …And then nothing.

“Sirji, when will I walk again?”

Suresh regains consciousness at the Army Base Hospital in Guwahati. He remembers seeing his buddy peering at him nervously. ‘Where am I?” he asks. “Thank God, you are alive,” says his buddy. ‘Havildar Ganga…?,” he  croaks. His buddy shakes his head. ” The casualty..?”.”Oh, he is fine. Not a scratch.The wound was not too serious. They’ve discharged him,” says his buddy.

Three weeks and three surgeries later, Suresh, now in the Command Hospital Lucknow, with the irrepressible optimism that defines his race (the Gorkhas), asks his neurosurgeon, “Sirji, when will I walk again?”. The doctor, well into his fifties, stops in his tracks, struck by his innocence and enthusiasm. “It’s only been three weeks,” he begins, in a mildly admonishing tone, then he gently places his hand on Suresh’s shoulder and looks him in the eye. “Son,” he says, “Your football days are over” remembering that Suresh was a striker in his battalion football team.   “We have to prepare you for life on a wheel chair. You will shortly be shifted to the paraplegic rehabilitation centre (PRC) in Pune, it’s a nice place…”the doctor goes on.

I met Suresh two weeks after he had moved to the Military Hospital at Kirkee, Pune in Jan 2005. He seemed to have bounced back.  It had been six months since the accident. In these six months he had fought his demons and had overcome them. He asked me about the battalion, about his mates, about the operations and missions the battalion had participated in since his accident. I got the sense that he was soaking in all I was saying, and was picturing himself back with the battalion. I spoke at length, studiously avoiding looking at his legs and trying to hide my dismay at seeing my strapping soldier, reduced to a shriveled skeleton. What hadn’t changed was his unbridled enthusiasm and the sparkle in his eyes.

As soon as I finished, he started telling me about his plans. He asked me how long it would take to learn to handle a laptop. I hedged, hating to dampen his spirits, wondering how this eighth standard dropout from the remote hills of Nepal would ever realize his lofty dreams. How wrong I was! Along with his enthusiasm, this boy was also blessed with a tenacious spirit and a ‘never say die’ attitude.

In the years that followed, he not only mastered the computer but went on to achieve distinction in the Computer Fundamentals Course, the Hardware and Networking Course, the Multimedia Course, the English Speaking Course, the Soft Skills Development Course and finally topped his batch acquiring a Diploma in Industrial, Administrative and Services Management (DIASM) from Pune University.

Suresh’s true calling, however, lay in the field of sports. It was here that Suresh truly triumphed over odds and excelled.

He experimented with several disciplines over the years, slowly developing his capabilities.Suresh is permanently disabled and paralysed in the region below his chest. His medical status reads D 6/ D7 fracture with paraplegia. This places him at a severe disadvantage even amongst wheel chair athletes, some of whom are paralysed waist below. This has however not paralysed his indomitable will. “I started slowly, strengthening my upper body, working deliberately on each muscle group,” he says. He recounts his journey over the last ten years with pride. ‘Table Tennis State Championship Singles – Gold 2010 and 2012”. “What happened in 2011?” I needle him. “Oh, I tried my hand at Lawn Tennis. National Doubles Silver” he says with a proud chuckle. “Why did it take you six years to win your first medal?’’ I persist. “Initially, I focused on athletics, track and field events. Wheel chair races and Discus, Shotput, Javelin were my events. I also tried my hand at swimming, 50 metres backstroke. None of these helped me realize my ultimate dream, winning a medal for India” says Suresh displaying a strong competitive streak, which I never knew existed under his affable demeanor.

In 2010, his idol, AD Pereira, a Para Asian Games Medalist, advised him to switch to racquet games and the medals poured in. Years of training in athletics, basketball and swimming had strengthened his limbs and developed his stamina, which stood him in good stead in racquet games.  He currently focuses only on Badminton in which he is presently ranked India’s No 1. “My dream now is to win a gold medal for the country in an international event” says this 38 year old soldier.

I ask him what the challenges he faces are. “Lack of sports infrastructure, trained coaches, sponsors. Funding is a major problem” he says. “I wouldn’t have been able to play the Indonesian Open and the England Open” without assistance from the Indian Army. I am ranked 41st in the world today. How do I improve my ranking, unless I get to play more tournaments?” he asks. “It’s a catch 22 situation. The government has decided to sponsor only those sportspersons who are in the first 15 in world rankings, for the Asian Games. To improve world rankings one must play more tournaments abroad” he says.

I change track. “Would you consider going back to the hills?” I ask. His voice assumes a serious note. “I miss my home. However, I don’t think I will be able to negotiate the steep slopes and the hair pin bends on my wheel chair” he says. “I will always be dependent for help, I’ll be an object of pity. Here we are all the same, one big family taking care of each other.” He proudly tells me about the Honda Activa Scooter he owns and drives. “I can drive to any part of the city, so can my wife. The paraplegic complex is wheel chair friendly. The houses have been designed keeping our special needs in mind. I can go to the ATM, the market, drop my kids to school, without any help. I belong here” he says.

“He epitomizes the spirit of this place, what would we do without him?” says the Director of the Paraplegic Rehabilitation Centre. “Suresh’s spirit is infectious. He has time for everyone. He listens, advises, encourages and inspires these lads. He is a natural, a born counselor and a life skills Guru” he says.

I have been meeting and speaking to Suresh over the years, more for myself than for him. He radiates energy. My last conversation with him was on Friday 19 September, the day I wrote this piece. Suresh soldiers on … hoping to get a call up for the Asian Games

(Suresh did not get to be part of the squad for the Asian Games, but is still consistently performing well and now awaits a call up for the World Championships).