Lt.Gen PS Bhagat – a legendary general who excelled in both war & peace 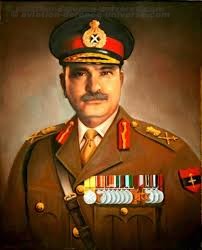 New Delhi.  Seventy nine years and India still remembers with pride and nostalgia,  the courage and ultimate act of bravery of a young Indian Army Engineer who was awarded in the colonial India, the Victoria Cross (VC).  Since then Lt.PS Bhagat and Victoria Cross have become synonymous for us Indians. It is the highest military decoration awarded for valour “in the face of the enemy” to members of the armed forces of various Commonwealth countries, and previous British Empire territories. Lieutenant General Premindra Singh Bhagat VC, PVSM (14 October 1918 – 23 May 1975) was a recipient of the Victoria Cross, the highest and most prestigious award for gallantry in the face of the enemy that can be awarded to British and Commonwealth forces. The Victoria Cross was conferred on him for his actions in the Sudan theatre during the World War II.
On 31 January 1941  in Sudan  while leading a detachment of 21 Field Company Second Lieutenant PS Bhagat  defused mines by hand under close enemy fire and without food or rest, he worked for four days, clearing a total of 15 minefields over a distance of 55 miles ( 88 kms ). He was decorated with the Victoria Cross later that month.
Bhagat was born on 13 October 1918 in Gorakhpur, British India to Surendra Singh Bhagat, an executive engineer in the provincial government of the then United Provinces. In 1930, he entered the Royal Indian Military College, a military school in Dehradun, where he was an average student. In June 1937, he entered the Indian Military Academy. As a gentleman cadet, Bhagat captained the academy tennis and squash teams. While noted by his instructors as an intelligent all-round sportsman, he was also described as a careless student . Bhagat applied himself to his studies in his final year and was commissioned in the British Indian Army on 15 July 1939 as a Second lieutenant (2Lt.) in the Royal Bombay Sappers and Miners. He was posted to the 21 Field Company of Engineers at Pune in September, shortly after war began in Europe. On 23 September 1940, Bhagat’s company was sent to East Africa as part of the 10th Indian Infantry Brigade, 5th Indian Division, Sudan Defence Force under the overall command of Lieutenant General William Platt. The 10th Infantry Brigade was commanded by Brigadier William Slim, MC (later Field Marshal the Viscount Slim). On 6 November, Brig. Slim launched an attack on the fort of Gallabat, with the assault spearheaded by the 3rd Royal Garhwal Rifles under Lieutenant-Colonel S.E. Taylor. While Gallabat was captured, an enemy counter-attack forced the brigade to withdraw. The Sappers were tasked with obstructing the enemy to prevent them from following too closely. At one stage, two broken-down tanks were filled with explosives and placed on a culvert to collapse it and halt the enemy. The charges were detonated, but one tank failed to explode and the culvert did not collapse. With the enemy closing in, 2Lt. Bhagat dashed out from under cover and with bullets flying all around him, detonated the remaining explosives and collapsed the culvert.[1] For his heroism, he was recommended for a Military Cross, but this was downgraded to a Mentioned in dispatches. After the brigade was relieved by 9th Indian Infantry Brigade in mid-November, it readied for the Battle of Keren.
On 31 January 1941, a mobile column of 3/12 Royal Frontier Force Rifles, including a detachment of 21 Field Company under Second Lieutenant Bhagat, was sent on a reconnaissance mission towards Metemma. Bhagat’s Bren carrier passed through a heavily mined stretch of road and detonated two mines, the second of which destroyed the carrier and killed the driver and a sapper. Bhagat then continued in another carrier, defusing mines by hand as the column moved down the road. Under close enemy fire and without food or rest, he worked for four days, clearing a total of 15 minefields over a distance of 55 miles. After having another Bren carrier blown up under him on 2 February, which resulted in punctured eardrums, he was relieved of further duties and evacuated to Khartoum for treatment. He was decorated with the Victoria Cross later that month, presented with the ribbon by General Wavell (later Field Marshal the Earl Wavell), the Commander-in-Chief, India in June at Asmara, and formally invested with the decoration by the Viceroy of India, Lord Linlithgow, at Viceroy’s House in Delhi on 10 November. To commemorate the event the Bombay Sappers celebrate this day as the Group Day every year at their Centre in Pune. They have built a Bhagat memorial which is a constant reminder of the pride brought to the Group by the brave soldier.
Following his return to India, Major Bhagat was assigned to the Punjab Boundary Force under Maj. Gen. T.W. Rees, trying to maintain law and order in the chaotic region following Indian independence and partition in August. On 1 September, after the dissolution of the Punjab Boundary Force, Bhagat was promoted to temporary Lieutenant Colonel and appointed CO of the Royal Engineers, 4th Infantry Division. He was promoted to permanent Lieutenant Colonel in July 1948. On 15 February 1949, he was appointed Commandant of the Bombay Sappers at Pune. In 1954, he was promoted to Colonel and assigned as the Chief Instructor (Army Wing) at the Defence Services Staff College at Wellington. He was promoted to Brigadier in March 1957 and assigned command of 165 Infantry Brigade at Ramgarh. Subsequently in his tenure Director, Military Intelligence  at Army HQ,  Bhagat completed a thorough assessment of the Chinese threat to India, but his report was not heeded before the Sino-Indian War of 1962. From June 1961 to May 1962, Bhagat took the National Defence College course, and was posted as Commandant of the Indian Military Academy (IMA) after he had finished. As Commandant of the IMA, he co-authored (with Lt. Gen. Henderson Brooks) the Henderson Brooks-Bhagat Report, an incisive Operations Review of the Indian Army in the Sino-Indian War. The report, though initially suppressed and classified top-secret, soon led to sweeping changes in the army.
Bhagat was later promoted to the rank of Lieutenant General and took over as the General Officer Commanding-in-Chief (GOC-in-C) of the Central Command. In June 1972, he became as the first GOC-in-C of Northern Command, in Udhampur,  He was also awarded the Param Vishisht Seva Medal (PVSM).
In January 1973, the then Chief of the Army Staff, Field Marshal Sam Manekshaw was to relinquish office. Although Field Marshal Manekshaw’s choice of successor was Lt. Gen. Bhagat, Prime Minister  Indira Gandhi was under tremendous pressure from the Minister of Defence, Y B Chavan to appoint Lt. Gen. Bewoor as the next COAS. This effectively ended his army career.
In July 1974, he became Chairman of the Damodar Valley Corporation, a major electric utility company. He arranged to remain in army service while heading DVC. During his tenure, DVC increased its power production from 45MW to 700MW, and organization morale and productivity improved greatly. However, after only ten months at DVC, General Bhagat died of pneumonia on 23 May 1975.
A braveheart who led from the front, had the rare combination of both physical and moral courage. As a proof to his physical courage his Victoria Cross has found a  place in the annals of history of Indian military and its traditions of supreme valour. And his tales of moral courage even today regale the officers of the Indian Army standing up to confront anyone for the upkeep of the morale and motivation of the men. He has been the most revered Colonel Commandant of  both Bombay Sappers but also of the Sikh LI Regiment.
Today on the seventy fifth anniversary of Lt Gen PS Bhagat winning the Victoria Cross, the nation salutes the soldier who made each and every Indian proud and remembers one of the rare breed of generals, who excelled in war, as well as in peace.
Share this on WhatsApp