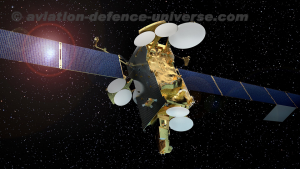 Toulouse, 07 June 2018 . SES-12, the 13th satellite built by Airbus for SES, has been successfully launched from Cape Canaveral, Florida on 04 June. Following separation from the launcher, the most powerful all-electric satellite ever has completed its initialization phase and has started its electric orbit raising (EOR) operations as planned.

SES-12 is the third all-electric satellite built by electric orbit raising. Its communications payload incorporates state-of-the-art solutions, in particular multi-beam antennas linked to a digital signal processor, which enable a multitude of basic spectral channels to be allocated to various beams in a completely flexible manner.

“Airbus salutes SES’ ambitions regarding innovation and responsiveness in a rapidly changing market and we acknowledge their strong support for all-electric satellite technology”, said Nicolas Chamussy, Head of Space Systems. “We have been using electric propulsion for station-keeping for more than a decade and have now in orbit three Eurostar E3000 satellites equipped with the EOR technology. The Airbus team has now started SES-12 Electric Orbit Raising (EOR) operations.”

SES-12 will operate in the Ku and Ka-bands with a total of 76 active transponders and eight antennas. Weighing 5,400 kg at launch it has an electrical power of 19 kW and will operate in geostationary orbit at the 95° East location for a planned service period of more than 15 years.