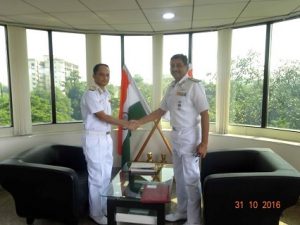 The Admiral was commissioned as an Electrical Officer into the Indian Navy in Aug 83 and holds a Masters degree in Computer Science and Engineering. He is also an alumnus of the Naval War College.

The Flag Officer, in his career spanning 33 years, has served the Navy in various important appointments including Operational, Staff, Dockyard and Research and Development. His afloat appointments include frontline Indian Naval warships Mysore, Krishna, Rana and Vindhyagiri.