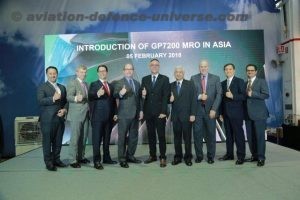 “At Pratt & Whitney, we are excited to inaugurate the GP7200 overhaul capability in Asia,” said Brendon McWilliam, senior director, Aftermarket Operations Asia-Pacific, Pratt & Whitney. “While the engine center is a center of excellence for engine overhaul and repair services across multiple engine lines, our operations in this region offer a wide range of engine maintenance, repair and overhaul services for operators in this region. We deliver high-quality aftermarket services for Asia-Pacific airlines as they meet the region’s growing demand for travel.”

Pratt & Whitney Eagle Services Asia is the only facility in Asia to service GP7200 engines. Today, the Singapore engine center already serves as a global center of excellence for GP7200 low pressure compressor (LPC) module overhauls. With this inauguration, it will also be responsible for the disassembly, assembly and testing of this module, which involves MRO for the five-stage low-pressure compressor, fan hub, drum, blades and stator assembly.

In addition, the facility was designated in 2017 as an overhaul facility in Singapore for the Pratt & Whitney Geared Turbofan™ (GTF) PW1100G-JM engine. Investing nearly US$85 million in capital, the facility will begin modifications this year to outfit it with advanced capabilities, including an environment control system and an engine flow line system. Pratt & Whitney expects GTF engine servicing in this facility to commence in 2019.

“The inaugurations of GP7200 overhaul as well as the ramp up for PW1100G-JM capability this year mark a major milestone in our long-standing partnership with Pratt & Whitney,” said Wong Yue Jeen, Senior Vice President, Partnership Management and Business Development, SIAEC. “Our collaboration has helped expand SIAEC’s portfolio of MRO capabilities, and we look forward to working even more closely together as our partnership extends beyond the two-decade landmark.” 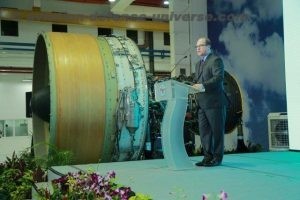 Since then, it has grown to become the center of excellence for the Pratt & Whitney PW4000 engine series, while having expanded its customer base to serve a diverse and global mix of the world’s leading airlines, low cost carriers and air-cargo operators. By 2017, it conducted more than 7,600 overhauls.

Lim Kok Kiang, Assistant Managing Director of Singapore Economic Development Board said, “Pratt & Whitney is one of Singapore’s first collaborations with major aerospace OEMs. We have deepened our relationship over the past three decades, which has seen Pratt & Whitney enlarge its portfolio of investments in Singapore. The expansion today demonstrates the continued attractiveness of Singapore as a prime location for aerospace companies to capture opportunities as Asia grows.”