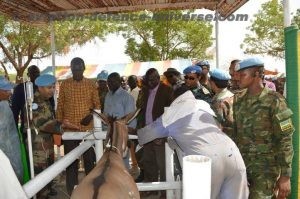 Veterinary facilities were restored at Malakal with inauguration of the Indian Veterinary Hospital by UNMISS Force Commander  Lt Gen Frank Mushyo Kamanzi on 17 May 2018. The hospital which was operational before December 2013 crisis in Malakal, had been rendered completely dysfunctional due to the strife and violence that plagued the region. This led to severe deprivation amongst the locals with respect to availability of medical facilities for their lifeline i.e. cattle and other livestock. The hospital has been re-opened in collaboration with local administration and aims to extend veterinary assistance for the livestock from the region. Hon. Deng Majeak Deng, Acting Governor of Central Upper Nile State, Acting Head of Field Office, Malakal, Mayor of Malakal City Council, Director General of Agricultural Ministry, Commander, Sector North 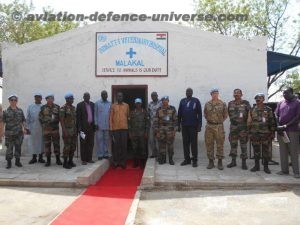 Realising the acute requirement of veterinary assistance by the locals and as per the request from Mayor, Malakal City Council and Agriculture Minister, Central Upper Nile State, Indian Peacekeepers went ahead to renovate and revive the dilapidated veterinary hospital at Malakal and restored its operations. In a comprehensive effort, which witnessed voluntary support from local government as also, UNMISS, the project of restoring the facility aimed at redressal of the aspirations of the populace. The quantum of interest and support which the project generated can be gauged by the enthusiasm with which the locals participated in cleaning and revamping the existing hospital. The veterinary team of Indian battalion also aims to provide training to the community animal health workers to empower the veterinary infrastructure in the state. 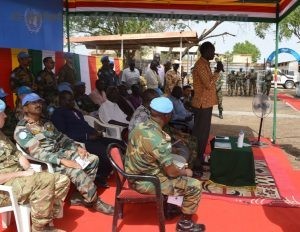 During his inaugural speech, Force Commander said, “This is the great initiative taken by the Indian Batallion which not only provide required veterinary services to livestock but also promote the culture of peaceful co-existence by supporting returnees and livestock farmers from the various ethnic groups to use one community facility in supporting their livelihood activity”. Mr. Anthony Agyenta, acting HoFO said, “I think, this is the biggest event of UNMISS-Sector North in this year. This step will definitely inspire IDPs to return and resume their livestock farming activity as their main economic activity to enhance their self-sufficiency. The training of community animal health workers will ensure the accessibility of veterinary services to the livestock in far-flung areas of the states”. 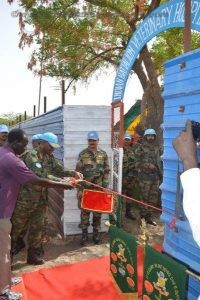 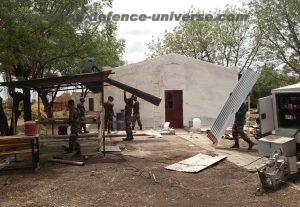 The local administration also admired the efforts taken by Indian battalion for reactivation of veterinary hospital. Hon. Deng Majeak Deng, acting Governor said, “Now we can say bye-bye to animal diseases. This area is prone to many deadly diseases causing huge loss in term of life of animals. Reactivation of this hospital will definitely stop the continuous loss of livestock resources”. During the inauguration, few livestock owners also came with their sick animals to get essential medication. Owners of the livestock expressed heartfelt gratitude for caring and treatment rendered to their animals. “We are very thankful to the UNMISS peacekeepers for their continuous efforts in saving the life of the animals. This hospital was desperately required, as we have lost many cows due to lack of treatment. We are also optimistic that the efforts taken by Indian peacekeeper will continue in future also,” said a local farmer.