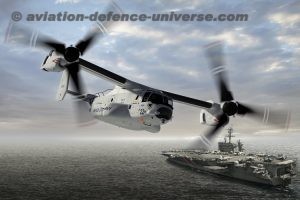 An MV-22 Osprey maneuvers on the flight deck of the aircraft carrier USS George H.W. Bush (CVN 77) during test operations March 20, 2012. George H.W. Bush is in the Atlantic Ocean conducting carrier qualifications. This was the first time an MV-22 made a landing on an aircraft carrier.
(U.S. Marine Corps photo by Petty Officer 3rd Class Brian Brooks)

“Bell Boeing is pleased to extend production of the V-22, supporting our warfighters with one of the most versatile and in-demand platforms in the U.S. arsenal,” said Chris Gehler, Bell Vice President for the V-22 Program. “This multiyear production contract provides program production stability through at least 2024.”

The U.S. Navy will use its new CMV-22B for transporting personnel and cargo from shore to aircraft carriers, eventually replacing the C-2 Greyhound, which has been in service since the mid-1960s.