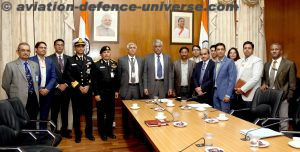 New Delhi. 26 December 2022. Innovations for Defence Excellence (iDEX), the flagship initiative of Department of Defence Production, has reached a milestone with the signing of its 150th contract. The contract relates to an Indian Navy project of the Defence India Start-up Challenge (DISC 7) SPRINT edition. The challenge was titled ‘Expendable Mobile Anti-Submarine Warfare (ASW) Training Target (EMATT) capable of simulating the sound and movement of a submarine’ and the winner was Altair Infrasec Pvt Ltd, Pune.

The Challenge envisaged development of a training target capable of being deployed from P8I aircraft, MH60R helicopters, ships doing speed up to 10 knots and other Remotely Piloted Aircraft without undertaking any modification on the platform from which the EMATT is required to be launched.

The contract was signed by Joint Secretary (Defence Industries Production) & Additional CEO/DIO  Anurag Bajpai with CEO, Altair Infrasec Pvt Ltd Anil Anand in the presence of Defence Secretary Giridhar Aramane and other senior civil & military officials of Ministry of Defence in New Delhi recently. The iDEX achieved the milestone within five months of the signing of its 100th contract on July 26, 2022.

In his address, the Defence Secretary elaborated on the conducive environment created due to the initiatives taken by the Government, under the leadership of Prime Minister Shri Narendra Modi, wherein new private sector companies are being provided with opportunities to grow and contribute to Nation Building. He expressed hope that more companies would take advantage of this ecosystem and help achieve the vision of ‘Aatmanirbhar Bharat’. He congratulated Altair Infrasec Pvt Ltd and assured the support of Ministry of Defence for the completion of the project.

The iDEX framework was launched by the Prime Minister in 2018 with the objective to provide a platform of co-creation and co-development in the defence sector, engage start-ups and develop defence and aerospace set up in the country. The iDEX is being implemented by Defence Innovation Organisation (DIO), established under Department of Defence Production.

Within a short span of time iDEX, which has also been awarded the prestigious Prime Minister Award for Public Policy in Innovation Category for the year 2021, has emerged as a game changer in the defence eco-system through its flagship programmes like DISC, Prime and Open Challenges (OC). iDEX has been able to build the required momentum and generate a critical mass of start-ups in the defence sector.

Till date, iDEX has received more than 6,500 applications from individual innovators, MSMEs and start-ups under DISC, Prime and OC. It has also been able to generate thousands of jobs and attract India’s talent back to the country.

During DefExpo 2022 held in October, the Prime Minister had launched Mission DefSpace, including DISC 8 to develop innovative solutions for the Armed Forces in the space domain through industry and start-ups. The last date to apply is January 02, 2023.

The iDEX, in association with Tri-Services, DPSUs, MSMEs & start-ups, is striving to develop cutting-edge technology products to make India ‘Aatmanirbhar’ and achieve the export target of USD $5 billion i.e. Rs 40,000 crore with the objective of transforming India into a global defence manufacturing hub in the next 25 years.

The iDEX is working at path-breaking pace to ensure that its agreements with the start-ups and innovators reach logical conclusions timely, eventually opening a myriad of options for the budding soon-to-be-unicorns and at the same time, addressing the requirement of the Services.