New Delhi. 23 September 2016. Rafale deal signed after many a slip between the cup and the lip. When the Indian cabinet committee gave its approval on Wednesday it did seem that the long awaited deal of procuring the French jet Rafale could get the green signal. And today it became a reality for the Indian Air Force. India and France have signed the deal for 36 fighter jets worth 7.8 billion euros or about Rs 58,000 crore.

Defence Minister Manohar Parrikar and the French Defence Minister Jean Yves Le Drian signed on the dotted line and after decades the IAF is going to get the latest fighter jets into its fleet.

India-specific modifications to the planes have been agreed upon. MBDA, will provide Meteor, an air-to-air missile with a beyond-visual-range over 100 km, and Storm Shadow an air-launched cruise missile with a range of over 560 km. Brahmos-NG will also get integrated on to the platform to add on to the lethal capabilities. Thales RBE2-AA radar and Thales TLS 2000 navigation receiver, which is used for the approach phase of flight will also be a part of the aircraft.

The French have made a 30 per cent offset commitment for military aerospace research and development programmes and the rest 20 per cent for making components of Rafales here. The offsets will be carried out by French companies Safran, Thales, MBDA and Dassault, all part of the Rafale project. 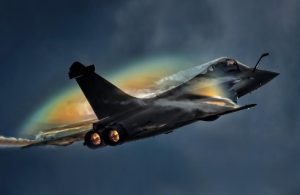 In addition India will also buy precision-guided munitions at a cost of $1 billion for immediate requirements, and it is expected to order five years’ maintenance and engineering support at a cost of $500 million.
The signing was done at Hyderabad house in the presence of both the defence ministers. “I am certain that the Rafale and its performance will hold high the colours of the Indian Air Force. It will demonstrate unstinting efficiency in protecting the people of India and the sovereignty of the world’s largest democracy,” Eric Trappier, Dassault Aviation Chairman and CEO who was present at the event said in a statement later.

It will be a direct acquisition of two Rafale squadrons of 18 jets each in “flyaway” condition. France has agreed to fast-track the deliveries and give us better terms for the outright purchase and longer maintenance support for the jets. Finding the money for this contract should not be a problem since it will have to be paid in instalments linked to deliveries.

India is buying the Dassault Rafale because it is in need of a state-of-the-art multirole fighter aircraft, capable of defending itself from fifth generation fighter aircraft , more so , now that China has the Chengdu J-20 ,a similar aircraft. Furthermore, Indian Air Force pilots tested the fighter jet in the MMRCA competition, which it won due to the fact that it suited India’s needs and was the most adaptable to Indian climatic conditions.
The deliveries will begin in 36 months after signing the final contract.