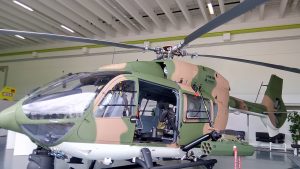 Donauwörth, Germany . 27 June 2016. It is a new marketing  strategy which promises to work. Airbus Helicopters has launched a weaponising programme  which will give the militaries of the world  the ability to  combat , scout, launch both  ground  and air-to-air attacks and all this without buying a  purpose-made helicopter.  This is HForcea helicopter armament system, which recently completed a first round of firing tests  which is a  a generic weapon system in development for the company’s commercial helicopter range. 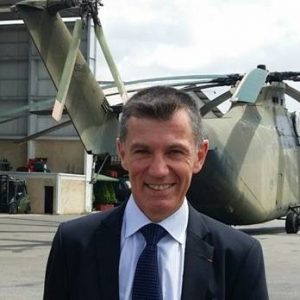 He explained that HForce is built on incremental and modular options. Option 1 is the armed scout, with the pilot would using a helmet-mounted sighting display to aim ballistic weapons—the 12.7-mm or 20-mm machine gun and unguided rockets. Option 2 is the ballistic light attack helicopter, which would be equipped with an electro-optic sensor (initially the L-3 Wescam MX-15 or -20). Using the E/O sensor, Option 3 is the guided light attack, which builds on Option 2 by adding guided weapons. Option 0 is HForce ready (fixed parts & harness for easy retrofit)The customer buys the helicopter when it can afford the aircraft. “Because we can come back to plug and play any kinds of weapons on it, you have potentially a light attack helicopter. You don’t need to buy the weapons to have the ability, because you just have to come back to us to plug and play, ” he said. 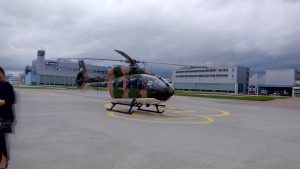 “The HForce program was  launched on April 2014 and the entry into service of central unit test bench was on May 2015, followed by the 1st flight on  December 2015 and the 1st firing campaign happened recently  in Belgium.  The qualification of the system on aircraft is to be ready by the end of 2017,” Fanchini informed. 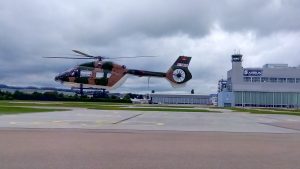 The initiative’s initial focus is on the medium, twin-engine H225M, testing of which has been underway, he said, and the light single H125M and light twin H145M will be added to the program. HForce is a generic weapon system that can be fitted onto any military versions of Airbus Helicopters’ commercial helicopter range

HForce enables a drastic reduction of workload thanks to experience gained from crew resource management on Tiger helicopters. With the HForce system in place, crew manage the helicopter’s weapons while the pilot flies, exactly like in an attack helicopter.

“Making the most of Airbus Helicopters’ experience in firing or operating any kind of weapon safely from any military version of our commercial range, a series of options is available for both pilot and gunner firing, with EOS and HMSD,” he said.