By ADU Bureau
New Delhi. 21 September 2016. When this day in 1961 CH-47 Chinook rose into the air for the first time and took its maiden flight, little would the facility manufacturing would have thought that it would still be producing it 55 years hence and the chopper will be the most sought after by the air forces of the world. 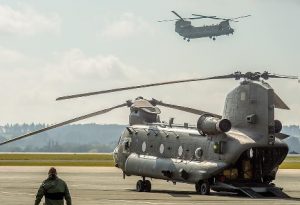 n late 1956, the United States Department of the Army announced plans to replace the Sikorsky CH-37 Mojave, which was powered by piston engines, with a new, gas turbine-powered helicopter.Turbine engines were also a key design feature of the smaller UH-1 “Huey” utility helicopter. Following a design competition, in September 1958, a joint Army–Air Force source selection board recommended that the Army procure the Vertol medium transport helicopter. However, funding for full-scale development was not then available, and the Army vacillated on its design requirements.

Developed more than a half-century ago and first used in combat by American troops during the Vietnam War, the medium-to-heavy-lift helicopter has been a resilient aviation presence for this European region. The Chinook has welcomed continual technology upgrades to stay relevant where other aircraft of its generation have put in their service time and been retired. 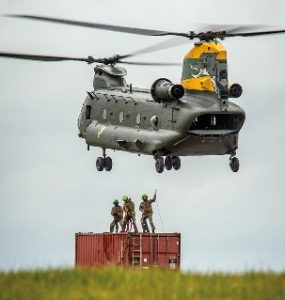 Vertol began work on a new tandem-rotor helicopter designated Vertol Model 107 or V-107 in 1957. In June 1958, the U.S. Army awarded a contract to Vertol for the aircraft under the YHC-1A designation. The YHC-1A had a capacity for 20 troops. Three were tested by the Army for deriving engineering and operational data. However, the YHC-1A was considered by most of the Army users to be too heavy for the assault role and too light for the transport role. The decision was made to procure a heavier transport helicopter and at the same time upgrade the UH-1 “Huey” as a tactical troop transport. The YHC-1A would be improved and adopted by the Marines as the CH-46 Sea Knight in 1962. The Army then ordered the larger Model 114 under the designation HC-1B. The pre-production Boeing Vertol YCH-1B made its initial hovering flight on 21 September 1961. In 1962 the HC-1B was redesignated the CH-47A under the 1962 United States Tri-Service aircraft designation system. It was named “Chinook”, which alludes to the Chinook people of the Pacific Northwest.

The CH-47 is powered by two Lycoming T55 turbo shaft engines, mounted on each side of the helicopter’s rear pylon and connected to the rotors by drive shafts. Initial models were fitted with engines rated at 2,200 horsepower each. The counter-rotating rotors eliminate the need for an anti-torque vertical rotor, allowing all power to be used for lift and thrust. The ability to adjust lift in either rotor makes it less sensitive to changes in the centre of gravity, important for the cargo lifting and dropping.

While hovering over a specific location, a twin rotor helicopter has increased stability over single rotor when weight is added or removed; for example when troops drop from or begin climbing up ropes to the aircraft, or when other cargo is dropped. If one engine fails, the other can drive both rotors. The “sizing” of the Chinook was directly related to the growth of the Huey and the Army’s tacticians’ insistence that initial air assaults be built around the squad. The Army pushed for both the Huey and the Chinook, and this focus was responsible for the acceleration of its air mobility effort.

The most spectacular mission in Vietnam for the Chinook was the placing of artillery batteries in perilous mountain positions inaccessible by any other means, and then keeping them resupplied with large quantities of ammunition. The Chinook was used both by Argentina and the United Kingdom during the Falklands War in 1982. Approximately 163 CH-47Ds of various operators were deployed to Saudi Arabia, Kuwait and Iraq during Operation Desert Shield and the subsequent Operation Desert Storm in 1990–91. The Chinook helicopters of several nations have participated in the Afghanistan War, including aircraft from Britain, Italy, the Netherlands, Spain, Canada, and Australia. Despite the age of the Chinook, it is still in heavy demand, in part due its proven versatility and ability to operate in demanding environments such as Afghanistan.
Argentina (former), Australia, Canada, Egypt, Greece, Iran, Italy, Japan, Libiya, Morocco, Netherlands, Oman, Taiwan, South Korea, Saudi Arabis, Singapore, South Vietnam(Former), Spain, Thailand, United Kingdom, United Arab Emirates, United States and Vietnam (former) have all been using the helicopter for decades . India has 15 on order and Turkey has 11.

The Chinook’s cockpit accommodates two pilots and an observer. The communications suite includes jam resistant HF and UHF radio systems and the helicopter is equipped with an Identification Friend or Foe (IFF) interrogator.
Three machine guns can be mounted on the helicopter, two in the crew door on the starboard side and one window-mounted on the port side. Additionally, the helicopter is equipped with a suite of countermeasure systems, which could include one or more of the following: a missile approach warner, jammers, radar warner, and chaff and flare dispensers.

This acquisition of Chinook for India will not only augment IAF’s heavy lift capability for military tasks but is a vital addition for the construction of strategic roads and infrastructure projects on the border. The Border Roads Organisation will also benefit by the Chinook in completing its long stuck road building projects in the North East.