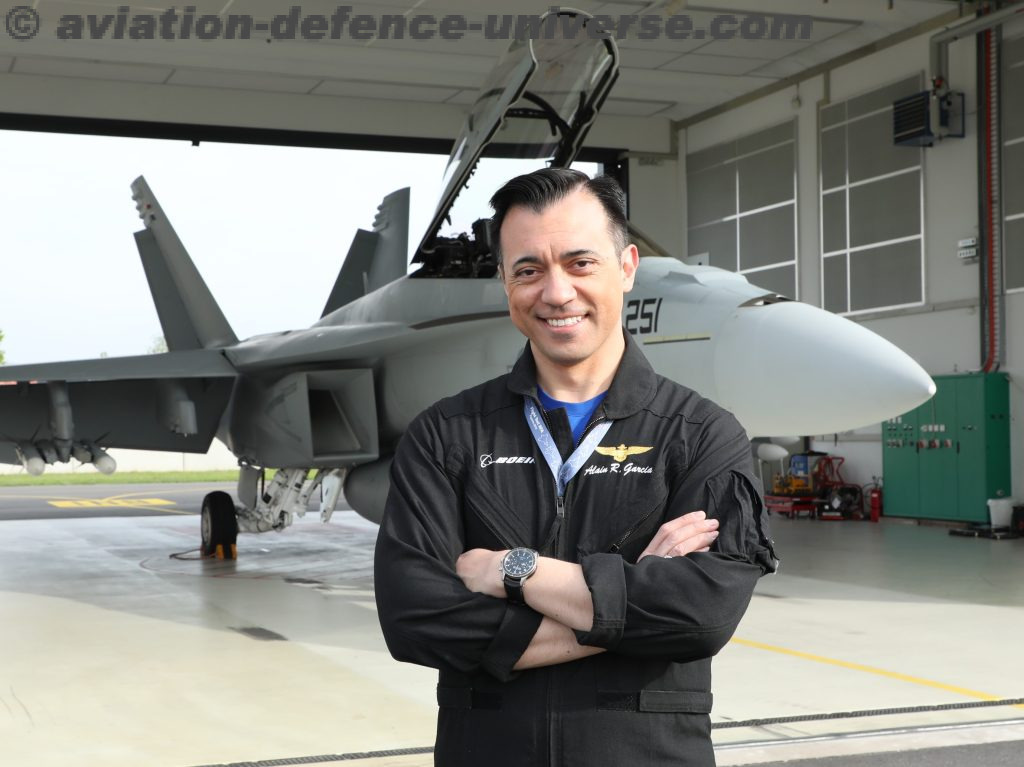 New Delhi. 04 December 2022. “The F/A-18 Super Hornet offers superior cost and value economics as it has a low acquisition cost as well as costs less per flight hour to operate than any other tactical aircraft in US forces inventory. For the Indian Navy, this equates to substantial cost savings over the life of the aircraft fleet as compared to a non-Boeing solution. Today Boeing sources parts, assemblies, and services from Indian suppliers to support the full life cycle of aircraft including aerostructures, composites, machined parts and assemblies, wire harnesses, cockpit panels, aluminum raw materials, forgings, avionics, mission systems, mechanical and electrical standard parts, tooling, and ground support equipment, “ reiterated Alain Garcia, Vice President, India Business Development, Boeing Defense, Space & Security and Global Services in an exclusive interview with Aviation & Defence Universe (ADU) on the occasion of Indian Navy’s Raising Day .

ADU. What about today’s context should make the Navy ever readier for interoperability of defense assets?  How does F/A- 18 fit into that scope?

AG. The Indo-Pacific has gained enormous political, strategic, and economic importance and has emerged as a prominent geostrategic landscape in recent years. The strength of the partnership for Indo-Pacific will be determined by the abilities of the countries to work together seamlessly. Commonality and interoperability of defence assets contribute not only towards efficient operations with the partner countries but also offer significant enduring strategic benefits to the partners. In this context, the combat-proven F/A-18 Super Hornet Block III delivers cutting-edge, next-generation multi-role strike fighter capability, outdistancing current and emerging threats well into the future. Block III’s networking allows the F/A-18 Super Hornet to interface with other assets of the Indian Navy.

For example, F/A-18s of the Indian Navy can potentially share data with P-8Is of the Indian Navy or P-8 of U.S. Navy and Royal Australian Air Force to significantly improve the capability of the partner countries for helping secure the Indo-Pacific. Recently, there have been tremendous advancements in unmanned systems that are to be used in a naval aviation environment. In the coming days, as Indian Navy inducts such systems, both the single-seat and two-seat versions of the Super Hornet on the Indian Navy carrier will allow interfacing with unmanned carrier-borne systems more effectively.

ADU. Boeing has time and again stated many advantages that the F/A-18 has, what would you state is that one factor that gives it an edge above the rest?

AG. The one main factor that the Super Hornet gives it an edge over the rest is that it was designed from its inception as a carrier-based fighter and everything that has been and will be integrated into it is to benefit carrier operations. The aircraft has the ability to fold its wings, allowing for better utilization of deck space on the aircraft carrier. Boeing has conducted thorough study and analysis that optimizes the number of Super Hornets that can fit aboard INS Vikramaditya and INS Vikrant, as well as optimizes the cyclic operations from those carriers leading to high sortie generation rates. Boeing has also developed a capability specifically for the F/A-18 Super Hornet Block III that will allow for the faster movement of the aircraft between the flight deck and hangar deck without having to remove or modify any part of the aircraft. This capability is compatible with the current elevator/lift configuration aboard Indian aircraft carriers.

Another important fact to note is that the two-seater carrier compatible variant of the Super Hornet offers several unique advantages to the Indian Navy including flexibility, higher utilization of the fleet, and the ability to embark certain missions from the carrier that benefit from having the second crew member. Additionally, two-seater F/A-18 Super Hornets can be used as trainers (ashore and on the carrier) and as fully capable fighters, operational from carrier and from land bases. Thus, Indian Navy will get tremendous flexibility and a higher asset utilization rate due to the carrier compatible variant of the two-seater variant of the F/A-18.

ADU. What capabilities does the HIT (Hornet Industry Team) enable the Super hornet to have that makes it a uniquely comprehensive platform for the Indian Navy?

AG. The diversity and strength of the Hornet Industry Team, comprising of General Electric, Northrop Grumman, and Raytheon, has the potential to deliver significant benefits to Indian industry. These industry leaders have proven their commitment to India by collaborating with Indian entities and delivering on Aatmanirbar Bharat objectives. The F/A-18 will enhance collaboration with Indian industry by facilitating knowledge transfer and promoting autonomy in operating and maintaining India’s fleet of F/A-18 aircraft. Further, this knowledge transfer may also provide opportunities for India to support F/A-18 fleets around the world through manufacturing and sustainment.

Raytheon Technologies which has been in the country for the last six decades with investments in manufacturing, engineering, training, and skill development, provides next generation warfare based on highly sensitive and sophisticated radar systems. It supplies the Active Electronically Scanned Array (AESA) radar and avionics to the Super Hornet.

General Electric (GE) has a large footprint in India in diverse industries, from aviation to healthcare to energy, and has noticeable contribution to the development and growth of the Aerospace sector in India for the last couple of decades. Super Hornet is powered by GE’s F-414 engine, which has logged more than five million hours, a variation of that F414-INS6 has been selected by Indian Aeronautical Development Agency (ADA) to power the Mk2 version of the LCA Tejas. The same engine can also be used for the Advanced Medium Combat Aircraft (AMCA). The AMCA is India’s ambitious under development 5th Generation fighter.

Northrop Grumman manufactures about 40-43% of Super Hornet fuselages. In fact, the entire aft fuselage of the aircraft is built by Northrop Grumman along with innovative systems, products and solutions to government and commercial customers worldwide. The company is seeking an opportunity with Dynamitic to support logistics and maintenance of F/A-18 subsystems like structure, components, and repair.

ADU. What about the Super Hornet platform makes Boeing so confident in its performance?

AG. The U.S. Navy operates more than 800 Super Hornets and EA-18G Growlers, the electronic attack version of the F/A-18 and have logged over 2.5 million flight hours on the fleet. The Block III configuration is suited to protect India’s maritime interests as it is built to meet the broadest range of missions while benefiting from the upgrades and knowledge related to U.S. naval aviation. We anticipate the Super Hornet opening up opportunities for greater interoperability between the two navies for a more secure Indo-Pacific.

In September 2020, Boeing successfully conducted ski-jump tests and extensive simulation studies that prove that the F/A-18 can operate from Indian Navy aircraft carriers and will meet or exceed their STOBAR performance requirements. We are also pleased with the performance of our F/A-18 Super Hornets that participated in the Operational Demonstration test flights this year in May and June. These trials were performed at India’s shore-based facility in Goa where conditions similar to that on the indigenously-developed aircraft carrier INS Vikrant were simulated. There the Super Hornet proved its ability to take off within INS Vikrant ski-jump parameters and land via arresting cable multiple times. The Super Hornets showcased several weapons payload configurations, including the carriage of two simulated Harpoon anti-ship missiles (can carry up to four), at heavy gross weights and successfully demonstrated its ability to take off from a ski jump and make an arrested landing that both met and/or exceeded the requirements for Indian Navy carriers. Following Indian Navy test requirements, no weapons were released from the aircraft, however, the F/A-18 operated with multiple weapons configurations to prove the fighter’s versatility to complete various mission requirements and did so exceptionally.