Sikorsky confident of M28 being just the choice for India New Delhi. 07 December 2016. When Sikorsky Aircraft acquired Poland’s largest aircraft manufacturer,PZL Mielec, in 2007, and with it the M28 aircraft family including versions with and without an integrated “glass” cockpit, little would the American manufacturer have thought that there would be a tailor made role for it in the burgeoning Indian aviation arena.

“Delays do not dampen our spirits and now  that In September 2016, the Director General of Civil Aviation has  approved the PZL M28 aircraft for commercial operations we are sure it is the right product to address the requirement of the market of regional connectivity,” said Arvind Walia, Sikorsky Lockheed Martin Regional Executive for India and South Asia.

For a manufacturer which has been synonymous with helicopters, it may be a surprise for many that the company has a portfolio of fixed-wing aircraft. In addition to the M28 turboprop it also has  the Reconnaissance Fixed-Wing Aircraft (RFWA). 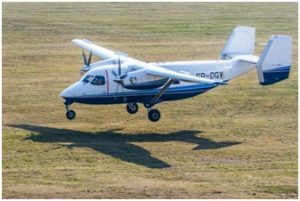 Sikorsky is confident  from a commercial standpoint the aircraft gives opportunity to connect the lesser known cities which operate a grassy or paved runaways giving the passengers, a time and cost effective option for transport from one city to another.

“There are close to 400 operational airstrips that aren’t paved or used for full commercial application. This is where the M28 will be useful in a passenger configuration. But the aircraft can be configured in other application as well which make it very versatile. It can be just right aircraft for Medevac, SAR operations, Para dropping  filming disaster and many more roles, ” he added.

The 485 cu ft. (148m3) cabin has a full-width aft door to para drop cargo. The cabin can be outfitted with a removable roller floor, optional cargo hoist, and heavy cargo restraints to speed loading and unloading.

“The twin turboprop aircraft offers a host of excellent characteristics best suited to connect regional cities, particularly in the north-east. The aircraft’s capability to land safely and easily on grass and gravel airstrips is inherent to the design. Also ideal is its easy conversion from passenger seating to carrying cargo, and of course as a VIP transport vehicle,” says Walia. 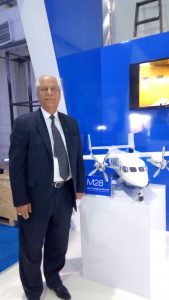 “I think the potential of the M28 in Intelligence, Surveillance, and Reconnaissance roles is very much the need of the hour keeping in mind Indian military and civil requirements today. It will be a great asset for the Indian multi terrain operations both in peace and other times,” added Walia.

With a robust airframe, responsive low-speed handling, and extreme Short Takeoff and Landing (STOL) performance, the Sikorsky M28 has proven its value in forward-deployed airlift operations. “Religious tourism in India for pilgrimages in mountaineous terrains might be just waiting for M28 to happen,” quipped Walia.