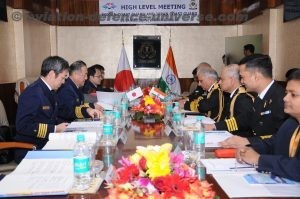 New Delhi. 16 January 2018. A High Level Meeting between Indian Coast Guard (ICG) and Japan Coast Guard (JCG) was held at Coast Guard Headquarters, New Delhi on January 15, 2018 under the provisions of the Memorandum of Cooperation (MoC) signed between the two agencies in 2006.

The Indian delegation was led by ICG Director General Shri Rajendra Singh while KCG was led by its Commandant Admiral Satoshi Nakajima in the meeting. It focused on augmenting the operational level interaction and capacity building in areas of search and rescue, pollution response and maritime law enforcement.

During the meeting, both sides agreed to strengthen the mutual cooperation in accordance with the provisions of the MoC. Sharing of best management practices and continuation of personnel exchange were agreed upon during the meeting. 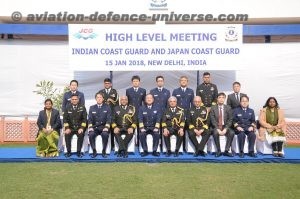 Japan Coast Guard Ship Tsugaru arrived at Chennai for participating in the joint exercise that is scheduled on 17 January. Both the DG ICG and the Commander JCG will be travelling to Chennai to oversee the Joint exercise.

The meeting was significant in providing added impetus to the already existing professional relationship between the Coast Guards of India and Japan.