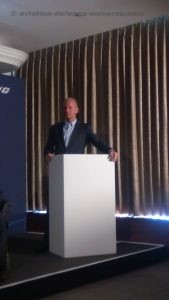 London. 15 July 2018. “We are moving our business case forward and our plan is to make a launch decision for this aircraft in 2019. We are still aiming for a 2025 startup date, ” informed Dennis Mullenberg, President, Chairman and CEO of Boeing . This was a much awaited statement on the Middle of the Market aircraft Boeing has been mulling on for years. He was speaking to the media at a pre-Farnborough 2018 press conference at London.

Though there was lack of confirmation in the tone but the news did sound like music to ears which have been waiting for years to hear of some development on this front. The aircraft would be between 737 single-aisle jets and the 787 Dreamliner.

Mullenberg was aided by his experts and other senior officials heading different areas. “We would like a 2025 airplane. It will be extra financial to run a different plane in its class but we are looking forward to it ,” said Boeing Industrial Airplanes CEO Kevin McAllister. The fact is that Boeing has started a project office in its Renton facility for this plane.

If rumours are to be believed , prospective customers are already showing interest and there is a rough estimate that each plane will cost around $76 million resulting into a list price somewhere between $130 million and 150 million making it cheaper than Boeing’s own 787 Dreamliner (listed at $239 million to $281 million) and arch rival Airbus’ A330 ($238.5 million). Asked whether a supply chain was in place Mullenberg replied that once the decision was final this would also be announced. 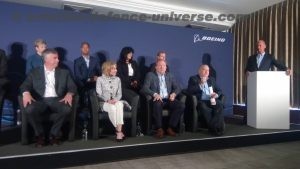 Boeing estimates a market for the jet of between 2,000 and 4,000 airplanes. Analysts feel that an ideal rate would be $13.5 billion per aircraft and the manufacturer will need to sell between 1,045 and 1,585 aircraft to make money on the new model. Also Boeing will need to decide on whether there will be single or multi suppliers of engines. As heard at the Singapore Air show earlier this year, Boeing is mulling on three different engine designs for this aircraft they plan to nomenclate 797.

The middle of the market, often abbreviated MoM is an airliner market between the narrow body and the wide body aircraft, is a market segmentation used by Boeing Commercial Airplanes since the beginning of this century and seems nearest to becoming a reality.