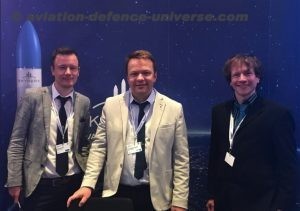 Farnborough Airshow. 18 July 2018.  Launch operator Skyrora has announced that it will begin its engine testing programme at Cornwall Airport Newquay’s rocket test facility in Q4 this year. The site will be an operational Spaceport by 2021.

The event is expected to be the first liquid engine test by a British small-satellite launcher to take place in the UK since Black Arrow around 50 years ago. The announcement was made at the Farnborough International Airshow. Edinburgh-based Skyrora selected Cornwall after considering alternative facilities across Europe. The company aims to capture a share of the fast-growing small satellite launch market and has already manufactured two completely different engines for testing at separate locations this year, allowing them to move at pace as they work towards their first test launch.

Skyrora will carry out a series of test firings at Newquay for their “LEO” engine, which will eventually be used to propel their satellite launch vehicle’s upper stage. They will utilise a hardened aircraft shelter which was previously used by the Bloodhound Super Sonic Car project for rocket tests in preparation for a world land speed record attempt next year. Skyrora’s deployment at Cornwall Airport Newquay is being supported by the Cornwall and Isles of Scilly Local Enterprise Partnership (LEP), through its Enterprise Zone Infrastructure Fund.

Daniel Smith, Director of Business Development at Skyrora, said: “Newquay is a great fit for us because of the enthusiasm and support from the team, combined with the immediate availability of the facility, providing us with a perfect short-term solution while we work towards establishing our own strategic capability north of the border for our larger engines”. Mark Duddridge, Chairman of the Cornwall & Isles of Scilly LEP, said: “Our recently published Space Action Plan outlines how we intend to build a £1 billion space economy by 2030, so we are delighted to welcome Skyrora to Cornwall where we are laying the foundations for tomorrow’s global space industry.”

The Airport’s rocket test facility is seen as a critical piece of infrastructure for Spaceport Cornwall which is planning to be the UK’s first horizontal launch spaceport at Cornwall Airport Newquay, operational by 2021. Al Titterington, Managing Director of Cornwall Airport Newquay, said: “It’s exciting to be involved in another project that demonstrates the capabilities of the Airport, which go far beyond air passenger services.”

Spaceport Cornwall Director Miles Carden added: “This partnership demonstrates the collaborative culture throughout the UK space sector to offer a world class satellite launch environment from research to design, test, launch and tracking.” Skyrora’s partnership with Cornwall includes a series of education and public outreach events to inspire the next generation of space engineers and entrepreneurs in Cornwall, a key deliverable for the Spaceport Cornwall project.