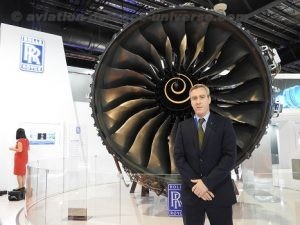 ADU. What are the top trends driving growth in India’s civil aviation sector?

AS. The Indian civil aviation industry is experiencing phenomenal growth and this is expected to continue for the years to come primarily for the following reasons:

ADU. How is Rolls-Royce positioned to support this growth?

AS. With rapid growth in India’s aviation industry, we expect a significant demand for widebody aircraft by airlines to meet increased passenger growth and operational efficiencies. Our Trent engines power the leading widebody aircraft and have a strong track record of delivering outstanding performance and reliability. In line with our vision to pioneer the power that matters to our customers, we are well-positioned to offer our strong portfolio of more efficient & cleaner products and solutions and play a key role in India’s growing aviation sector.

AS. A competitive environment demands that operating costs be kept low which will bring down ticket costs and attract more passengers. As India’s air traffic grows, airlines can deploy widebody aircraft to address the ever-increasing passenger volumes as they provide carriers more revenue per available seat mile and also prove to be a high-yield option. To maximise operational efficiency, airlines can replace multiple flights of smaller aircraft with one optimized flight at the right time, the right size and in the right place. Widebodies also provide significant advantage at airports with restricted infrastructure, enabling airlines to carry more passengers to airports with limited slots. Airlines can also take advantage of their widebodies to free up a substantial amount of narrow-body fleets which can be used on newly opened regional routes.

Additionally, widebody aircraft enables airlines to offer the highest levels of passenger comfort and an optimal experience through better value-added services and more deck space – something that is becoming a deciding factor in passengers’ airline choices.

ADU. What benefits do Rolls-Royces’ Trent engines bring to the market?

The latest version of the Trent 1000 incorporates technologies from the Trent XWB and Advance engine programmes contributing to the Dreamliner achieving a 20 per cent greater efficiency than the aircraft it replaces, as well as having half the noise footprint of previous-generation aircraft.

The Trent XWB is the world’s most efficient large aero engine flying today, and includes advanced materials and the latest fan system technology. It balances fuel efficiency and life cycle costs while delivering weight savings and improved aerodynamics. The Trent XWB is also the fastest selling widebody jet engine ever, with over 1,700 engines ordered by 45 customers.

ADU. Please tell us about your participation at WINGS India 2018.

AS. We are excited to participate at Wings India 2018, the premier civil aviation event in the country organised by the Civil Aviation Ministry in India. It gives us an opportunity to meet potential customers and key stakeholders enabling us to play a significant role in India’s growing aviation industry.

In line with our vision to pioneer the power that matters to our customers, we’re showcasing our cleaner and more fuel-efficient range of Trent aero engines – including the Trent 1000, Trent XWB and Trent 7000, which power leading widebody aircraft and are ideal to support the ever-increasing passenger volumes in India’s aviation sector.