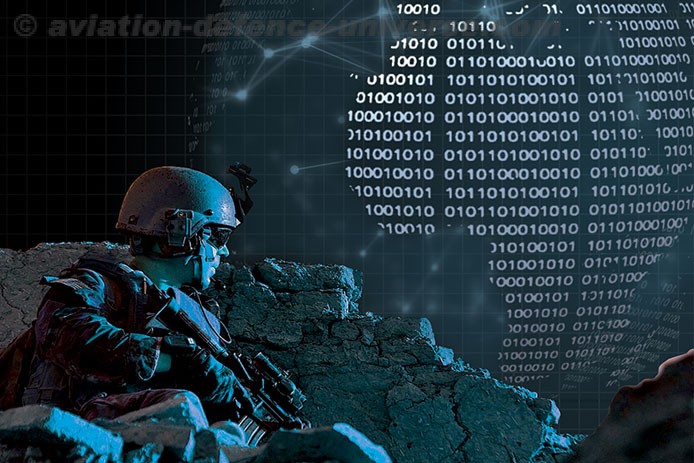 Waltham, Massachusetts. 18 June 2017. The future battlespace will be wrought with threats unimagined a few short years ago. How to meet them? With an array of innovations designed to maintain ‘overmatch’ – the fighting advantage that keeps the U.S. and its allies ahead of adversaries, now and in conflicts yet to come.

At the 2017 International Paris Air Show, June 19-25, Raytheon is showcasing technologies to block and counterpunch enemy attempts to blind, choke and rout. The innovations cover the spectrum, from advanced cyber defense to increased processing power for radars to networked defenses.

“This is Star Trek-type technology,” said Raytheon engineer Duane Estrada, “where you will have one box that’s doing a tremendous number of things, integrating them and doing it super-fast, so it will make decisions that are not possible today.”

Some breakthroughs come in thin packages, like computer chips that can be stacked on small wafers to make radars smarter.

Stacked computer chips boost processing power; they are the building blocks for advanced systems and networks that can identify and target incoming threats. Such networks cover land, sea, air, space and cyber, connecting the many layers of missile defense that protect the U.S. and its allies, including Raytheon’s Patriot Air & Missile Defense System and its Standard Missile series of interceptors.

Adversaries exploit geography and technology to hide their forces. They are mobile and elusive, concealing themselves from exposure.

Paramilitary or terrorist groups could send small drones to attack larger, more organized artillery forces and destroy exposed ground formations. Their ability to move around could make it difficult for missile crews to target these groups.

The enormous processing power afforded by wafer-stacking technology would give smaller radars and accompanying sensors the power to track and identify concealed targets.

“You reduce the weight and the size by orders of magnitude,” Estrada said, adding that the effect also increases processing power by a similar scale.

Difficult surveillance missions, such as tracking and identifying targets deep in foliage, become easier. Such a sensor package employing the wafer-stacking innovation is only two to three years away from reality.

As sensors from the high-powered, active-array radars mounted on special mission surveillance aircraft or the infrared eyes of unmanned vehicles become more connected, it will be critically important to protect them from cyber attacks. Raytheon is now developing the technology that will harden systems aloft and on the ground, to keep hackers from interfering with aircraft crews or battlefield commanders.

The company’s advantage is its long experience in military-grade tech, which it is adapting to protect commercial organizations through its investment in the cybersecurity firm Forcepoint.

Future commanders will also fight off attackers using electronic warfare, such as agile signal jamming, to confuse and defeat their adversaries.

Raytheon, which has decades of experience in jammers, decoys and other implements of electronic warfare, is now developing smart systems that can find and fight enemy jamming faster than human agents alone, even as signals are morphed on the fly to evade detection. It will be cognitive electronic warfare, armed with robust algorithms and capable of learning about an attacker in the instant needed to fend off the threat.

Raytheon equips fighting vehicles that will face future challenges, from the F-35 Joint Strike Fighter, which carries an array of the company’s weapons, to the futuristic U.S. Navy destroyer USS Zumwalt DDG-1000, running on complex systems the company has integrated, to armored vehicles equipped with Javelin or TOW missiles.

The future can readily be seen in the Coyote unmanned airborne system, which recently demonstrated the capability to launch in a swarm, move in formation thanks to autonomous networking, and fly itself toward a designated end point. The possible uses are endless, from intelligence, surveillance and reconnaissance activity to strikes against moving targets.

“We are developing weapons with the ability to successfully execute missions in dynamic environments,” said Dr. Thomas Bussing, vice president of advanced missile systems at Raytheon. “Even if an adversary tries to take away our traditional advantages or hide within a denied environment, we could still find them and eliminate their ability to threaten us.”