Thimphu/New Delhi. 31 October 2018. Despite of being the big brother in the region , India’s immediate neighbourhood is sensitive , needs  strategic security and a strong military environment.  Bhutan’s  geo-strategic importance to India as a security buffer  in its geographical proximity to China is  indisputable  and  extends  beyond  the  military security and has always assumed vital  importance  in  India’s  military  calculus.

The foundation for the same was laid during the first visit of Indian Prime Minister  Pandit Jawahar Lal Nehru with his daughter Indira Gandhi in 1958 ,when he rode on horseback  and was housed in a guest house at HAA which is now the Officers ‘ Mess of IMTRAT. A  plaque on its entrance reminds one of this historical event. Raised on  27th August 1962 , few months after DANTAK was born, IMTRAT was given the task of  training the personnel   of Royal Bhutan Army  in the art of warfare  and bracing itself for operational tasks .  It thus became the oldest training team sent out by India to a friendly foreign country.

Colonel BN Upadhyaya of 9 Gurkha Rifles had the  honor  of being it first Commandant. On 20 Jul 1962, Brig (then Col) B N Upadhyay, assumed the appointment  with his team of officers included Maj A N Sudan, Maj S N Gurung, Maj P N Kackar and Capt P K Chakraborti, RMO. An additional eleven officers  joined the team by the end of the same year. On completion his tenure Brig TV Jaganathan , the first  CE of Dantak took over as Commandant  in April 1968.He later moved Tactical Head Quarters of IMTRAT to Thimpu ,the capital of Bhutan. Presently IMTRAT is commanded by a Major General . Head Quarter IMTRAT is located in HAA Djong ( an old monastery ) at an altitude of 10,000 feet in the lap of densely forested mountains & rivulets.

When one approaches the  formation a serene statue of Buddha & Teen Murti welcomes you , symbolic to the  Indo – Bhutan friendship. In its proximity is famous  Kalpa ( akin to Rawan in India ) monastery named after the deity which blessed this region until  Padmasambhava came & spread Buddhism. However , the people in the region have strong faith in the power of  the said deity . As such before & after any major event they seek the blessings at Kalpa monastery and seek uninterrupted completion of the event, be it a marriage or the HAA Mela or a Golf Tournament.

IMTRAT is a mix of  Indian Army & Indian Air Force. While the officers are from all arms & services for the training & administration purpose , the men or PBOR are drawn from five infantry Regiments , Artillery, Engineers , Signals , Electrical & Mechanical Engineers (EME) , Army Supply Corps (ASC), Ordnance& Postal  Service .The Engineer section is akin to a Garrison Engineer , while the Signals provide communication at Head Quarters and to all the detachments of IMTRAT. EME , ASC & Postal Service provide the logistic support.

There is a full fledged Military Hospital with medical , surgical , paediatric  & dental facilities. Indian Air Force mans the Air Traffic Control to guide air traffic to & from Bhutan at Paro  airfield . IMTRAT is conducting pre course training for all ranks of RBA . Thereafter these trainees go to India to attend various courses. From administrative & operational points IMTRAT has established detachments at Yongphula, Jongkhar,Thimpu, Paro,Drikgyee and Djong.

Under defense agreements in place since 1949, India is responsible for military training, arms supplies and the air defense of Bhutan. This agreement was affirmed and updated in February 2007 with a new treaty of friendship.

Besides the training –their main stay  – IMTRAT also hosts HAA Mela  every year during October for 3 days. Several shops of all commodities come up & thronged by all spheres of life from far & wide . To make it attractive the public is entertained by para jumps, riding display, traditional Tsam dance, dog show etc. Golf tournament is another interesting event organized by IMTRAT at their well manicured course where Haa river bisects it & makes it challenging . Enthusiastic golfers from India House , Army, RBA , RBP , Dantak & civil administration  participate in it . 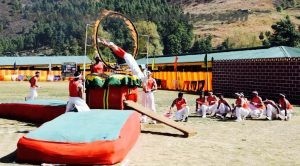 With the presence of India’ harbingers of  peace  & development  in Bhutan for the last 67 years –India House , Dantak & IMTRAT- people of Bhutan are becoming self reliant. They have started the process of democracy and just concluded a peaceful  elections for their  third Assembly , established Department of Roads,& Wangdi RBA Trining Centre. It is therefore time for India to realign its bonds with our closest friend Bhutan so as to further the aspirations of the enlightened mass.

Since its inception  in Bhutan in 1962, IMTRAT has been providing  pre-course training to the officers of RBA and RBG before sending them to India for specialised training. All RBA and RBG officers are trained at the Indian Army’s officer training institutes, namely the National Defence Academy (NDA) in Pune, and the Indian Military Academy (IMA) in Dehradun.

Under the 2007 India-Bhutan Friendship Treaty, both countries have agreed to cooperate closely with each other on issues relating to their national interests. It provides that, neither Government will allow the use of its territory for activities harmful to the national security and interest of the other. As per the earlier  treaty, India was to guide Bhutan on foreign and defence policies. The 2007 treaty is meant to respect the sensitivities of Bhutan regarding its sovereignty. In reality, it gives India virtual responsibility to protect Bhutan from the kind of external threat including threat from Chinese military.

Moreover, the Eastern Army Command and the Eastern Air Command of India have protection of Bhutan as their role. Bhutan’s most recent military engagements targeted Indian separatist groups operating inside Bhutan and being a part of the Indian side during last year’s Sino-Indian stand off at Doklam. The bilateral relations between the Himalayan Kingdom of Bhutan and the Republic of India have been traditionally close and both countries share a ‘special relationship’, making Bhutan a protected state, but not a protectorate, of India. India remains influential over Bhutan’s foreign policy, defence and commerce.

IMTRAT which recently celebrated its 56th Raising Day in picturesque valley of Haa, Bhutan with customary grandeur and gaiety,  this year celebrations were more significant since Bhutan and India are celebrating 50 years of Diplomatic relations, has the onus of keeping Bhutan safe and well prepared to tackle any military contingency from across the borders or within. Standing strong on the  military traditions and competency of the Indian Army, IMTRAT has always been a source of strength to Bhutan and a  reason for self confidence in India.