Thimphu. 24 October 2018. As I started my journey after landing in the Land of the Thunder Dragon a thought flashed on my mind, that roads in these tough terrains have been built not only with mere cement and concrete, but also with the sweat of men of the Border Roads Organisation of India. And being a Sapper officer I take pride in the fact that for  these men, who  toil on foreign soil to make their adopted country state-of-the -art are my fellow sappers. And the icing on the cake is that the  efforts of these men continue to be valued  and honoured  by Bhutan for the last fifty seven years and the name Dantak is as house hold as Thimpu or Paro. 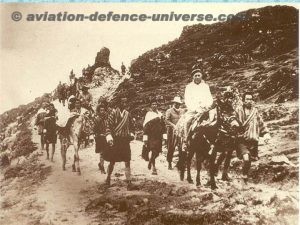 Project Dantak, one of the oldest Projects of Border Roads Organisation was raised in 1961 with its Headquarters at Deothang, exclusively for works in Bhutan. The origin of Project Dantak is linked to the talks between Pandit Jawaharlal Nehru and the King of Bhutan during the Prime Minister’s visit to Bhutan in 1958.  These talks led to the formulation of the first development plan for Bhutan covering the period 1961 to 1966, with construction of roads taking overriding priority.

Colonel TV Jaganathan was the first Chief Engineer of this project and he reached Eastern Bhutan on 24 Apr 1961. A humble beginning was made in bamboo huts with thatched roofs.  Since then Project Dantak has never looked back.  It has contributed to the economic growth of Bhutan by not only developing roads and tele communication networks but also other prestigious works throughout Bhutan. 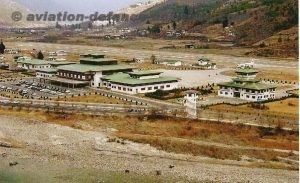 And as one gets off the aircraft at the airport at Paro in Bhutan,  very few know that this airport is made by BRO.  In 1968, the Indian Border Roads Organisation built an airstrip in the Paro valley, which was initially used for on-call helicopter operations by the Indian Armed Forces on behalf of the Royal Government of Bhutan. Other works executed in Bhutan are the  Advanced Landing Ground at Yangphulla and 82 helipads all over Bhutan. 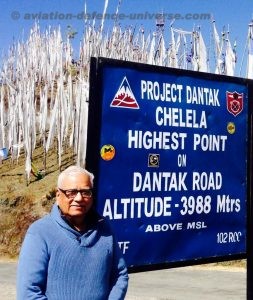 Over the years, the Project has completed approximately 1600 km of black topped roads and 120 km of tracks in Bhutan with 5000 meters of bridges over them. One of the important road is from Phuentsholing  to Thimphu also called the Western Highway, the  work on this  nearly 180 Km long stretch commenced in 1962 and completed in 1968. In the same period the road from Darranga  to Trashigang which is called the  Eastern Highway and is nearly 180 Km long was constructed from 1961 to 1968. And simultaneously the project was also making the East West Highway which is 595 Km long and was completed in 1968. This was followed by the construction of the Central Highway and  this 248 Km road completed in 1980.

And as one travels down these roads one cannot miss sign boards placed all along the route to encourage safe driving by Dantak. The signs are in English and occasionally also in Dzhongka, Bhutan’s official language. ‘Don’t hurry, be cool, since heaven is already full’, ‘Mountains are pleasure only if you drive with leisure’ and ‘Going faster will see disaster’ are some interesting ones. 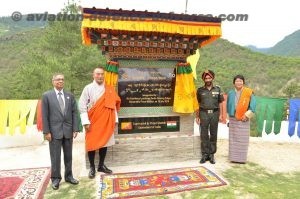 Project Dantak spread its wings when it undertook  road works in the Indian state of Assam, where it  constructed the roads and handed them over to the Assam State PWDs. Damra – Baghmara, Baghmara – Maheshkhola,  Balat – Shella,  Lyngkhat – Dawki,  Borghat – Sonapur,  Bholaganj – Nongiri and Mankachar – Mahendraganj – Purakkhasia are some of them. In 1987 responsibility for construction of some Indo – Bangladesh Border Roads was entrusted to the Project by Ministry of Home Affairs.  The roads were completed in the record time and handed over to State PWD of Meghalaya.  Patharghat – Bholaganj, Muktapur – Jaliakhola, Sadartilla – Purakhasia, Purakhasia – Sibbari, Maheshkhola – Balat and Sibbri – Baghmara 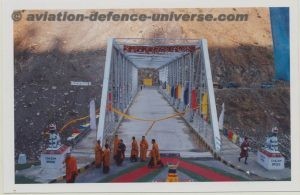 are some of the stretches constructed.

Whenever there has been a need for expansion in nearby sensitive areas, Dantak has always been the one Government of India falls back on.   In 1991, the construction of the 198.06 km of Indo – Bangladesh border fencing work was also entrusted to the Project. This work was completed in Feb 1988 and handed over to CPWD. Strengthening and widening of NH-44 to double lane specification, including  construction of permanent major and minor barriers was also taken up by the Project and on completion handed over to Project Setuk.

During April 2004, the entire AOR of Project Swastik in the State of Sikkim, was also entrusted to the Project, necessitated due to move out of HQ Project Swastik to Afghanistan. The area was reverted back to Project Swastik in Mar 2008 on its return. And the role of the project did not end here. Important buildings were also constructed by them. These  include Sherubtse College, Bank of Bhutan at Samdrup Jongkhar, IHE at Thimphu , residential accommodation of Chukha Hydel Project and Terminal buildings and the ATC Tower at Paro Airfield. 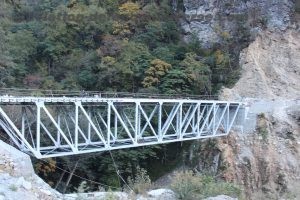 The tele-communication networks of Bhutan was established by the Project by constructing 524 Km of trunk route, establishing  broadcasting station at Thimphu and the Bulk Petroleum Storage Installation at Samdrup Jongkhar of 14 tele-exchanges and Indo – Bhutan Micro Wave link. The Bhutan ongkhar were also constructed by the Project. Besides construction of roads and prestigious buildings., modern medical facilities were introduced into Bhutan by Dantak with the construction of a 50 bed hospital at Deothang which brought cheer to many Bhutanese through the services of the Project doctors and medical staff. 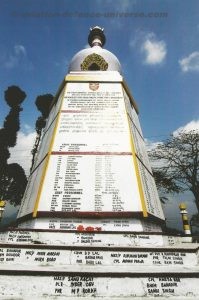 In a major move on 14 August 1997, the Project Dantak Head Quarters  moved to its present location at Simtokha (Thimphu) from Deothang. There have been 24 Chief Engineers commanding the Project since inception to date. The personnel of Project Dantak have been given several awards including Kirti Chakra.In sacred memory of those bravehearts, who laid down their life during the course of their service in Bhutan, a memorial was built at Deothang in 1965, on a site approved by the late King Jigme Dorji Wangchuck, the 3rd Druk Gyalpo. A new memorial has now been constructed at the present location of the Project HQrs area. 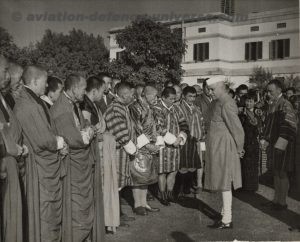 The Royal family of Bhutan considers the deeds of Project Dantak historically imp and on the request of the 3rdDruk Gyalpo, personnel of Project Dantak, have been permitted to wear the Dantak Fmn Sign on the right sleeve of their uniform, as a mark of distinction.  The Late King also decorated Brig OP Datta the sec CE with “DruksungThuksel” gold medal. The Royal family has given several gifts to the Project pers in recognition of their meritorious service to the Kingdom of Bhutan.

Project Dantak owes its present achievements in a large measure to the Royal patronage by His Majesty Jigme Khesar Namgyel Wangchuck, the King of Bhutan, His Majesty Jigme Singye Wangchuck, the 4th King of Bhutan, co‑op of the RGoB, the backing of the Indian Ambassador in Bhutan and the unstinted support of the DGBR. Above all, the goodwill of the people has been a major sustaining factor for their efficiency and morale. 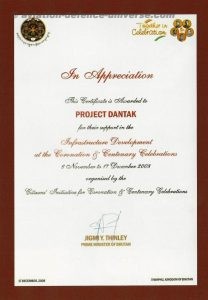 However, with Bhutan coming of age random expressions in social media and at times in main stream question the presence of Dantak . However, such musings have been contradicted by the Bhutan Govt, Today’s Indian stress  on the development of Hydel Projects in Bhutan is justified but it should not be at the cost of Dantak. India specially MEA should remember that the investment in Dantak would always fetch more dividends than any other.

The achievements of the Project have been a catalyst in the strengthening of Indo‑Bhutan friendship and co‑op, which was highlighted by the Late King who always said that the history of Bhutan is inexorably linked with Dantak. Project Dantak is building friendship & goodwill between India & Bhutan and continues to strive for the infrastructure development of the Himalayan monarchy turned democracy with the goodwill of its citizens and the royal patronage of His Majesty, the King of Bhutan.  The saga of development in Bhutan and Project Dantak is inseparable and forms the foundation of the development routed friendship between the people of India and Bhutan.