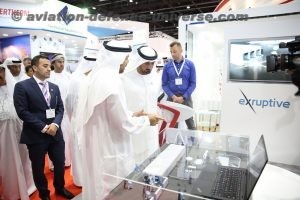 Opening the world’s largest annual aviation event, His Highness said contribution of the aviation sector to Dubai’s GDP has been growing steadily and is expected to reach 38 per cent, thus creating more jobs and aiding overall growth.

Speaking on the sidelines after touring the exhibition area, His Highness said on the new initiatives of the Dubai government to increase investments and instill confidence in the private sector, His Highness said:  “The government wants to work with the private sector to bring in more traffic and business to Dubai to support the new initiatives.”

Dubai Civil Aviation Authority Director General HE Mohammed Abdullah Ahli said: “Our participation in the Show is in line with our objectives of benefiting from the latest knowledge and expertise along with the best practices in managing air traffic growth.”

The Middle East aviation industry is witnessing an exciting time with the region recording the second highest passenger traffic growth rate and continuing with its multi-billion-dollar airport expansion and modernization programs. Whether it is the latest scanning technologies, passenger experiences or robot baggage handlers the region’s airports are investing in the latest of technology and concepts and stay ahead of competition. This exciting time in the industry will be reflected at the Airport Show 2018.” 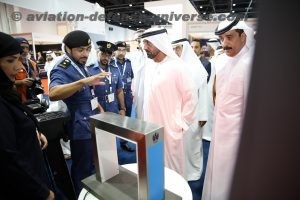 The world’s largest annual aviation event brings together more than 300 exhibitors from over 90 countries under one roof to showcase their innovative and game-changing products offered to key decision-makers across the Middle East, North Africa and South Asia (MENASA) aviation industry, which is witnessing a massive growth.

The show is held at a time when the aviation industry in the region is witnessing a ‘synchronized recovery’ and rapid growth after suffering socio-economic upheavals and geo-political storms following the debilitating global financial crisis in 2008.

Delivering the keynote Address at the Global Airport Leaders’ Forum (GALF), Dubai Airports CEO Paul Griffiths said: “Technology will improve the airport experience for the future of travelers as most of things they hate today will be removed such as security hassle, long distance to the aircraft among others.”

“He said 10 million passengers take plane every day and it will go up to 21 million by 2035. Dubai has spent $12 billion on infrastructure to boost the capacity to 90 million at Dubai International airport.”

He said an all-encompassing ‘synchronized recovery’ is evident and the aviation industry is witnessing rapid growth after suffering socio-economic upheavals and geo-political storms following the debilitating global financial crisis in 2008.

Airport Show organizers Reed Exhibitions said the show is a complete sell-out with 10 per cent increase in participation and space. 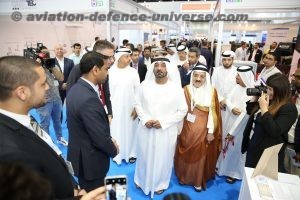 Daniyal Qureshi, Group Exhibition Director at Reed Exhibitions Middle East, said: “The Middle East region has been recording a phenomenal growth in terms of passengers as well in infrastructural investments. This has generated a tremendous interest from global aviation players and Airport Show provides an ideal platform bringing companies, organizations and decision-makers from all over the world on this platform to explore the latest technology as well as information.”

Global interest in the Middle East aviation has remained strong given the excellent growth record.  According to International Air Transport Association (IATA) global passenger traffic results for 2016 Middle East carriers had the strongest regional annual traffic growth for the fifth year in a row at 11.8 per cent compared with the global average of 6.3 per cent.