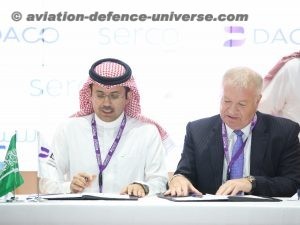 The agreements are with Vanderlande and Serco Middle East.

As part of DACO’s agreement with Vanderlande, the global market leader for value-added logistic process automation at airports, the two entities will work on introducing a state-of-the-art Baggage Handling System (BHS) at KFIA that will help make travel procedures smoother for airport personnel, passengers and airlines.

“Guided by our vision to transform airports and redefine the travel experience, our efforts in the last 10 months have focussed on expanding the airport’s operational efficiency, as it witnesses a steady growth in passenger traffic and an increased demand for commercial services. We are pleased to partner with global leaders like Vanderlande and Serco Middle East to execute our long-term plans for the airport, and transform it into a major hub for air transportation within the region and beyond,” said Mr. Turki Abdullah Al-Jawini, Chief Executive Officer of Dammam Airports Company.

The agreement with Serco Middle East, is to to install cutting-edge fire and rescue services at the airport. The contract, which makes KFIA the first Saudi airport to leverage an international service provider’s expertise in firefighting systems, will help raise the airport’s safety standards in line with its existing firefighting protocols.

“As a globally recognised fire and rescue services provider, Serco is pleased to enter this agreement with Dammam Airports Company that has been mandated to oversee the operations of the King Fahd International Airport. Passenger safety and security are among the most critical aspects of airport operations, and we are delighted to utilise our industry-leading expertise in providing cutting-edge fire and rescue solutions to enhance the airport’s security procedures,” said Mr. David Greer,Chief Executive Officer, Serco Middle East.

“Vanderlande is pleased to support the Dammam Airports Company in its efforts to create a world-class airport experience and seamless travel experience for the airport’s growing passenger traffic. Our state-of-the-world Baggage Handling System will not only boost the facility’s operational efficiency, but also positively impact all aspects of the passenger journey,” said Mr. Remo Brunschwiler,CEO, Vanderlande.