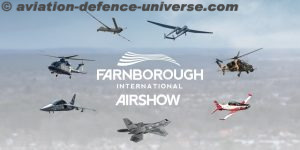 Turkish Aerospace will participate in the Farnborough Airshow which will be on 18-22 July 2022. The Farnborough International Airshow has been the global platform for the aerospace and defence industry. Turkish Aerospace will be attending the major airshow with its state-of-art technology products. ATAK helicopter and New Generation Basic Trainer Aircraft HÜRKUŞ will be flying during the event.

“Participation of one of the biggest International Airshow have more meanings since we participate the show with our indigeneous projects. ATAK and HÜRKUŞ will make impactful flight show and we are proud to display our state-of-art technology products with the visitors. I hope that we will be attending the next airshow and will have a chance to watch flights shows of Advanced Jet Trainer and Light Attack Aircraft HÜRJET and Multirole Heavy Combat Helicopter which will make first flights on March 18, 2023.“ said Prof. Temel Kotil who is President and CEO of Turkish Aerospace.

LEADING THE AVIATION INDUSTRY
Turkish Aerospace, being one of the world’s top 100 aviation and defense companies, continues for the activities intensively in all areas of aviation industry. In addition to indigenously developed helicopter, aircraft, unmanned aerial vehicle and satellite projects, the company carry out aerostructure production, testing and delivery services for world aviation giants with half century of experience.

Therefore, being the pioneer aviation company of the country, also contributes to the development of qualified engineers for the high-tech technologies. Further working closely with the universities from different countries, the company has also offices in the technology centers at some of them, aiming the R&D studies. Turkish Aerospace is also counting the day for March 18, 2023, to roll out the National Combat Aircraft (Turkish Fighter) project, which is the 5th generation fighter aircraft that only 3 countries over the world aspire to produce. Turkish Aerospace will produce Turkish Fighter as the main integrator under the project coordination of the Presidency of Defense Industries of Türkiye.

Today, with 13 thousand engineers and technician colleagues, Turkish Aerospace is aiming to become a part of one of the 10 largest aviation companies in the world.