Farnborough, UK. 19 July 2022. Farnborough Airshow after a hiatus of four years courtesy the COVID-19, in the month which  celebrates the 100th birthday of Jan Vlček the doyen of Czech aviation, saw high spirits in the  Aero Vodochody  chalet at the show. Good news which had just got in was the final certification of L-39NG in accordance with EU/NATO regulations cleared. Excitement was that orders for the L-39NG were confirmed from twelve each from Hungary, Portugal and Vietnam , four from Senegal and a follow on order of six more from Portugal.

Aero Vodochody CEO & President Viktor Sotona informed that Vietnam is the launch customer. “ It is a great legacy of having made 7000 aircraft out of which 700 are still flying in 60 countries. The number one business line is the L-39 NG which was announced at Farnborough 2014. The successor to the legendary L-39 Albatros is the completely redesigned L-39NG, which is a modern and efficient light jet aircraft capable of performing the role of a light fighter and [MM7] complex aircraft for full training of pilots of modern air forces. A journey which started from the design phase in 2016 has ended in final certification today.”

The New L-39NG jet aircraft successfully passed difficult fatigue tests of five lifespans simulation. All together that means five times 5,000 flight hours in a high designed load spectrum. The fatigue tests were run on the third prototype 7003 in the Czech Aviation Research Centre (VZLÚ). The testing prototype has shown that the L-39NG should have three times longer lifespan than the original L-39 Albatross. After five proven life cycles of the  aircraft, the complete non-destructive inspection of the aircraft airframe was done. A residual strength test with up to 120 percent of the limit load  took  place. After that, additional fatigue cycles of the landing gears followed. The landing gear is designed to be extremely resistant.  Aero Vodochody and VZLÚ is cooperating with the Czech Technical University in Prague on airframe analysis.

He added, “The  second business line is MRO which is important especially for keeping our good relationship with the customers. It has been neglected a little bit in the past, but we consider the MRO business very important because as I said, we still have over 700  operational from the previous  generation. So what is very important for us is to prepare a nice modernization package. It also involves replacement of the old engine.” 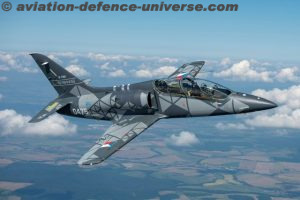 The L-39NG aircraft is a modern and effective light jet capable to serve in a role of light attack and/or unified, comprehensive training system for modern air forces. The aircraft’s avionics are prepared to train future pilots of 4th and 5th generation aircraft and can be tailored to the customer’s requirements. The L-39NG is equipped with five hard-points for weapons. The aircraft also features a broad range of simulation technologies, including the integration into high-tech tactical simulation centres with the goal to increase training efficiency. Strategic partner of the L-39NG project is the Czech company OMNIPOL by having 50% of share and financial contribution in the project.

Jaromír Lang, chief designer of the L-39NG passionately explained, “ The L-39NG is based on the aerodynamic concept of the current L-39 with optimized features to reduce resistance and increase efficiency and utilizes the latest technologies and equipment. Power is provided by the modern FJ44-4M engine supplied with the TAP Blue engine support service to ensure unprecedented airworthiness and predictable maintenance costs. The baseline L-39NG has two underwing hardpoints for drop tanks, while the armed version has a centerline and four underwing hardpoints for weapons carriage, including a centerline gun installation such as FN Herstal’s HMP 0.5-in a machine gun pod. Total payload is 1,650 kilograms. ”

L-39 owners can also take advantage of the L-39NG program, a new, more economical American-made engine and more modern instrumentation can be installed in the machines. During September 2020, the Czech defence ministry certificated the L39NG in accordance with new supranational military standards recognised by all EU and NATO military authorities. This allows the aircraft to operate in international airspace and that it conforms with all safety requirements. In July 2022, EU/NATO certification to EMAR 21 standards was granted for the baseline version of the L-39NG.

“Although it shares its external shape with the original L-39, of which nearly 3,000 were built, the NG is essentially an all-new aircraft. It is powered by a Williams International FJ44-4M turbofan and features a Martin-Baker CZ16H ejection seat, 15,000-hour airframe life, single-piece forward canopy, and new avionics. The latter include state-of-the-art training functions such as virtual radar and the simulation of mission systems and weapons,” Lang informed.

He quipped, “ our advantage is that we can deliver the aircraft in both Eastern and Western version. It is reality, because the Vietnamese contract is the pure Eastern version, including the Russian language on board.  So what was the difference between the two? The Russian standards especially for the avionics, differ from the Western one. There are differences in weapons too.”

The new team at the helm was visibly happy and as if this was not sufficient, came the announcement of Czech aircraft manufacturer Aero Vodochody (Aero) and US-based Patriots Global Training (PGT)  announcing an MoU for increasing flight training services and establishing production of the L-39NG in the US and support for ongoing aircraft manufacturing, components, logistics, aircraft testing and assistance in operating training facilities.

Aviation enthusiasts have been following the change of ownership of the European aircraft manufacturer from Czech to Hungarian-Czech ownership keenly. In September, 2021, Aero Vodochody sale transaction was successfully completed. Based on an agreement signed in July 2021 Hungarian company HSC Aerojet Zrt. became the 100% owner of Aero. In HSC Aerojet Zrt. majority is held by Hungarian businessman Kristóf Szalay-Bobrovniczky and minority is held by Czech company OMNIPOL a.s. The sale also included Vodochody Airport.