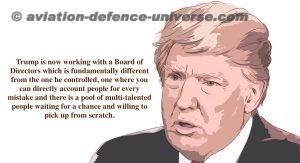 New Delhi. 03 September 2017. One of the reasons for  US President Donald Trump’s public support was the associations people had with the word “Politician”. To an average American, a conventional politician was reminiscent of the Bailout plan during the ’08 recession and jobs that were going outside of US only never to return. Trump was the person with an example of success and a clean slate in politics. To the people, he was an outsider- enough to distance himself from the hate but close enough to be an alternative at the same time (he had actually been hinting to run for president since the 90s). This was the perfect setting for President from a conservative party. But its the same reason that has now led to the level of mismanagement in the White House.

Tensions in the Pacific seem to be intensifying day-by-day with the latest event of North Korean missiles flying over Japan recently, where people woke up with the alert against the missiles flying over the Japanese Cities. The situations have never been more serious with only one mistake required to trigger a war between North Korea and the US (as South Korea and Japan both have their defence tied to the US).

This may be the highest level of diplomacy that Trump Administration may need in its entire tenure but the situation has gathered little attention of the POTUS. This ignorance can cause serious dents in the US relations with its allies in the Pacific but to be honest, its not the foreign relations and external affairs that the President should be worried about but internal problems that is rocking the White House every other day.

The US diplomacy is failing in the Pacific not because of incompetent decision maker but the absence of decision makers. The top positions in the Trump administration and Cabinet are still mostly vacant or failing to pick up – some due to delay in nominations from Trump himself while some due to incessant firings and resignations since day-one.

As per the conversation that Max Stier, president of the nonpartisan Partnership for Public Service, had with the Guardian newspaper , “The Trump administration is way behind prior precedent and certainly behind what we need in order to effectively be able to run the government,” Stier told the Guardian. “You can’t play the game effectively if you don’t have your team on the field.”

To be honest, it has always been a tough ride for any republican president to get a level-playing field given the fact that American media is largely dominated by the democratic-supporters and that is why a critical analysis rather than crass rhetoric is essential to actually know why these firings and resignations are dominating the government functioning.

See, one of the reasons conventional politicians are needed is because they have been in the system for long enough to understand the workings- dealing with disagreements and working your way out. He has to work with a Board of Directors he does not control and which is fundamentally different from a business where you can directly account people for every mistake and there are a lot of multi-talented people willing to pick up from scratch. This was the primary reason for most of the firings in his tenure. His hirings show cronyism and nepotism with unrealistic expectations from his peers resulting in eventual dissatisfaction and conclusive firings.

Donald Trump knows that his voter base does not include the liberal New Yorkers or the Silicon Valley techies, its the conservatives of Virginia and the Poor Middle-aged of Arizona. People care more for their jobs than climate and people who think every latino and black to be an immigrant. But on the other hand his advisory panel consists of Businessmen who do care for New Yorkers (even if it’s for personal gains) and Silicon Valley techies who could not be more liberal in their stance. Clearly, a conflict waiting to happen.

In fact many of his advisers such as Elon Musk and Travis Kalanick actually joined  Trump in hope of influencing his opinion on some issues but the decision at 2017 Climate Summit and Travel Ban triggered consecutive resignations from Musk and Robert Iger it also made sure that no other Silicon Valley giant would step in for the advisory council. Also, Travis Kalanick had already resigned by this time in wake of the Travel ban on 7 muslim-majority countries. The clouds from the Climate Summit were about to be lifted but then, Charlottesville happened. The ambiguous statements and supposed support to far right from Trump proved disastrous with 8 consecutive resignations in 3 days followed by an eventual dissolution of Economic and Manufacturing advisory council.

Even though the Trump Cabinet has seen multiple rough patches in its journey, a silver lining that cannot be ignored is the consistency and faithfulness of the Cabinet-level appointees. The positions at the cabinet level are far from filled being close to 50% mark, but the pattern to take note of is that out of all positions filled, only one firing was visible in the cabinet. Nearly all the appointees have stuck by their President’s side in troubled times. Surely, the Trump administration is paced at a snail speed in nominating the cabinet positions, they are sure proving a better bet than the hasty ones at the White House. But, with having hardly completed the First year and more than half of the cabinet left to nominate, will they hold true for the future?

Post Script. As we get uploaded North Korea woke the world with its announcement that  it  has successfully conducted a test of a hydrogen bomb  — the country’s sixth nuclear test which created a magnitude-6.3 tremor, making it the most powerful weapon .

(Shashank Shekhar is a Delhi-based analyst. The views in the article are solely the author’s. He can be contacted at [email protected])