The era of  integrated anti-drone solutions has arrived 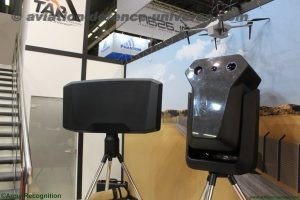 New Delhi. 08 July 2018. With the Farnborough Airshow coming up it is just the time to look back at the world of anti-drone systems, a technology which should be the cynosure of all eyes at the show. M/s Skylock Anti-drone Systems, a part of Avnon group  (an Israeli privately held company specialising in turnkey solutions for defence and security markets)  showcased an anti-drone system at Eurosatory 2018 this year. There was something novel out it, hence the need for an upfront mention.

In order to better appreciate this system, this article attempts to unfold the larger dimension of the anti-UAS warfare, and in that, tries to see Skylock in its perspective . This compact and  promptly deployable system integrates multiple drone- kill solutions on the same platform. Normally, there are anti-drone weapons meant to counter unmanned aerial Systems (UAS)  that provide one type of kill solution on a single platform; for instance, kinetic kill or laser kill or electro-magnetic (EM) kill and so on.

In the game of anti-UAS warfare, the biggest challenge for the air defence warrior is to balance the “cost of kill”. Simply stated , there is no point in killing a 100$ UAS with a million dollar air defence missile. Also, if the target is in multitudes (swarm) what will be the logic, or more importantly, what will be the effect of launching one/two/three missiles at them; each costing a fortune? The bottom line challenge is therefore to build “low cost kill solutions” to take on “low cost UAS”

The next challenge in bringing down the UAS is the ‘detection challenge’. Basically, it is very difficult for the radars to detect the UAS due to their low radar cross section (RCS), small size, low acoustic signatures and low IR signatures. The smaller drones have their survivability (implied high degree of difficulty in detection) built into their miniature sizes or stealthy features. Both these manifest as low RCS signature.

To deal with the detection challenge, defenders are busy researching new and innovative methods to detect small UAS. Cutting edge research has shown that phased array radar technology coupled with the tremendous growth in radar computing and processing power has the capability to pick up small maneuverable UAS using the technique of electronic beam switching.

UAS possess lower speeds in comparison to aircraft which aids in radar detection. In this scenario pulse doppler radars with Moving Target Identification (MTI) facility prove to be quite effective. For detection of small, un-cooperative, low RCS UAS in high clutter environment,  the trend is to go for higher speeds of scanning incorporating multiple detection solutions on the same platform.[i].

Another vulnerability of UAS is its  electro-magnetic uplink and downlink with the ground control station (GCS). This is also being used by passive sensors to perform the function of alerting and cueing. Equipment in this category include IR  alerters and acoustic alerters. 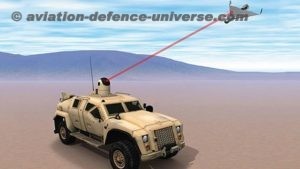 A number of electronic support measures (ESM) based solutions are also useful in detecting the UAS through recognition of their RF/EM signatures. Though the ESM based sensors have been around since World War II, a host of new technologies have entered this field lately, to improve the probability and accuracy of detection.

Once detected, the UAS are a soft target for conventional hard kill systems. Fair weather/all weather Very Short Range Air Defence (VSHORAD) systems consisting of guns and man-portable/short range SAMs have the capability to kill a UAS, provided it has been detected, either visually or electronically, by their surveillance/tracking/missiles guidance radars.

Besides the VSHORAD system, designers of several short range SAMs (SRSAMs) have claimed that their weapon systems are capable to take on the UAS.

Open media also reports about engagement of UASs using manned aircraft. In one such event, a manned US aircraft was launched to pro-actively kill a Reaper UAS over Afghanistan when its ground control station lost control over the drone. There is a report of Israeli manned aircraft shooting down a UAS by using an Air-to-Air Missile (AAM). The UAS was alleged to be an Iranian UAS, launched from Lebanon and tasked to carry out reconnaissance deep inside Israeli airspace. Iran probably used its SU-25 fighter jets to fire on a US Predator UAS in November 2012.

While the hard kill options for the UAS using SAM system or worse, the manned aircraft, may appear to be straight, it simply does not address the “Cost of Kill Challenge” as explained earlier.

Such weapons in anti-UAS role are badly out of balance in terms of cost consideration between the arsenal being used and the target being addressed. Besides, such hard kill measures can address individual targets or at best, a few; what about swarms of UAS? For these threats, such options may neither be viable, nor effective.

The most potent option to take on a UAS is the soft-kill option. This kill method is anchored on debilitating the real-time data link between the UAS and its GCS . The UAS’s ground-to-air or air-to-ground data link signal to its GCS can either be jammed (which in all probability may result in UAS abandoning its mission and returning to base) or be hacked and exploited, in which case, the UAS’s control can be taken over  from the adversary and made compliant to the defenders’ commands.

In the above context, Iran claimed that its Electronic Warfare unit downed a US RQ 170 Sentinel UAS that had violated Iranian airspace. The photographs of the downed UAS show the aircraft relatively un-damaged except for minor damage on its left wing. This ruled out the possibility of a crash/engine/navigational malfunction. Experts feel that either it was a cyber/ electronic warfare attack system (indicating a soft kill) that brought the system down or it was a glitch in the command and control system

M/S Raytheon has already  demonstrated its capability wherein, a 50 Kilo Watt solid-state laser had a UAS in flames. The manufacturers are developing a low-cost directed energy laser system to complement the close-in-kinetic energy systems. Laser Area Defence Weapon is already a reality. It promises to provide an effective kill solution to short range threats like the rockets, missiles, UAS and such other targets. The kill speed is the speed of light and the magazine is nearly ‘unlimited’.Laser based killing of UAS is already an established option. Boeing mounted a 1KW laser system on its established Avenger platform and showed its capability to shoot down a handful of small UAS. In the next phase of this weapon system, it installed a 10KW solid-state laser on a Higher Energy Laser Mobile Demonstrator to take on various threat representative targets which includes UAS.

Kinetic kill vehicles taking on the UAS type of threats are in existence from long. Cougar is a kinetic kill solution manufactured by M/s QinetiQ of UK as a cost effective counter to low cost tactical UAS.  In this system, a low cost un-cooled long wave IR seeker is used to acquire the target and guide an interceptor on a collision course.

Peregrine Eagle is another air launched decoy/drone system employed as an anti-UAS system in the Kinetic Energy kill domain having a range of 800 miles with a service ceiling of 40,000 feet. It employs high power microwave and is an electronic counter to UAS control systems.

Having gone through the above details about the  diverse and dynamic world of anti-UAS world, the reader will now be able to appreciate the virtues and combat advantages of a system like the Skylock Anti-drone system. The same are briefly captured. The system is customisable both for civilian, as well as, military use. It offers the detection and kill system in one weapon configuration.

For detection , it has a radar optimised for minimal RCS detection of  drone type of targets (frequency band not disclosed) . The radar provides  360 degree coverage and can track a small UAS up to a range of 3 kms and a medium sized UAS up to 10 Km.

The above radar system is backed up with an Electro optical (EO) detection system equipped with a high resolution day camera and a thermal night camera with a laser range finder. This can track a UAS type of target up to a range of 2.5 Km.

The system provides twin kill solutions. The first option is the soft-kill mode, where a covert spectral tracking of the UAS is carried out to jam the signal between the UAS and its GCS.

To deal with UAS that are fully autonomous (and hence independent of GCS) or have pre-programmed mission modules on board, the system provides a laser-kill solution. A laser with the current peak output of 1000W can be configured with the system. It is claimed that this capability will be sufficient to bring down a small-sized UAS up to a distance of 800 m.

Some Flip side Comments

While a system like Skylock is forward looking and provides detection and twin-kill solutions in a single weapon configuration, it must not be seen “out of its case”. Some points:-

The weapon is essentially a terminal-end system as the soft kill range is not likely to extend the EO capability of  2.5 Km.

1000 W is a baby step . Much higher laser power outputs will be needed to effect laser kills at reasonable distances of 2-3 Km.  As already explained, 10 KW/50 KW or even higher power systems are already in the market ex big players- Boeing, Raytheon and others…

Future research is required  to increase laser power, as also, to build the capability to take on multiple targets at the same time.

The above comments however cannot steal away from the utility and the likely effectiveness of this system in dealing with small sized UAS at the terminal end.

(Lt. Gen.VK Saxena is a Delhi-based  former Director General Army Air Defence. He is presently an Advisor to a leading Defence PSU . The views in the article are solely the author’s. He can be contacted at [email protected]).