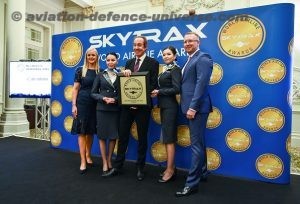 London, UK. 18 July, 2018. Air Astana, the flag carrier of Kazakhstan, has been recognised for 4 Star service excellence, retaining the accolade of ‘Best Airline in Central Asia and India’ in the Skytrax World Airline Awards for the seventh consecutive year. The prestigious awards ceremony took place at the Langham Hotel in Central London yesterday.

The Skytrax World Airline Awards are recognised throughout the world as a valued benchmarking tool that is independent, impartial and global. The survey measures passenger satisfaction among business and leisure travellers, across all cabins (First Class, Business Class, Premium Economy Class and Economy class).

Over 19 million air travellers were surveyed about their experiences with airlines on the ground and in the air over a 10-month period. The survey measured passenger satisfaction across a wide range of performance indicators of airline front-line product and service, including check-in, boarding, on-board seat comfort, cabin cleanliness, food, beverages, in-flight entertainment and staff service. The survey covered over 200 airlines, from the largest international airlines to smaller domestic carriers.

“We are of course delighted and honored to be recognised once again. This award is particularly important and valued as it has been won based on the personal choice of our customers. I would like to offer them my sincerest thanks and look forward to welcoming them on board again soon. I would also like to recognise our team of dedicated employees who go the extra mile each and every day to provide consistently outstanding service to all our passengers. We will continue to work hard and strive for even higher standards.” said Peter Foster, President and CEO of Air Astana.