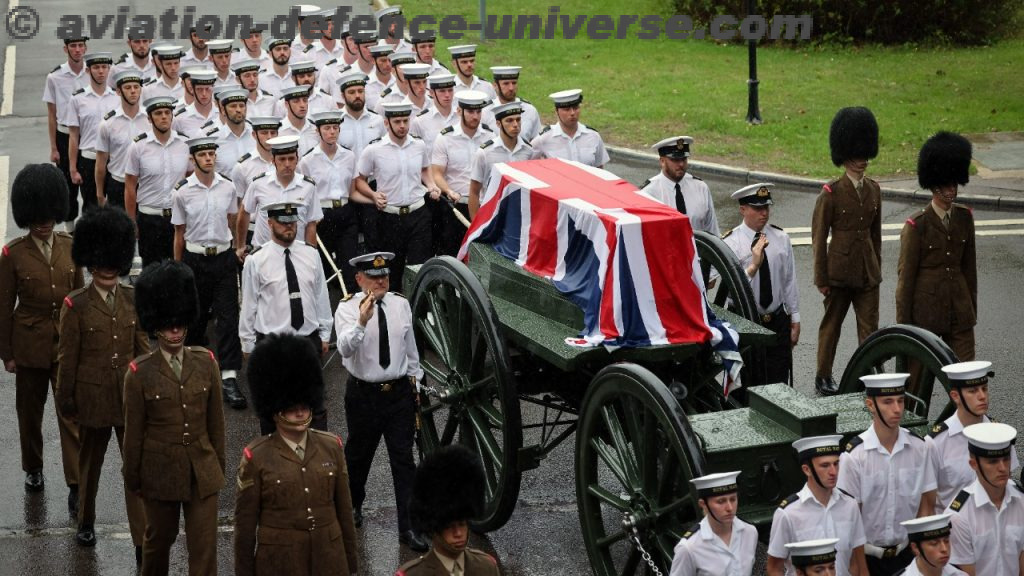 More than 1,000 sailors and Royal Marines  underwent final preparations for their pivotal role in the Queen’s funeral after days of intensive training. Royal Navy sailors had the honour of pulling the State Ceremonial Gun Carriage bearing the Queen’s coffin for two miles through the streets of London – a duty they have performed since the funeral of Queen Victoria in 1901. Some 98 sailors  hauled the two-and-a-half-ton ceremonial carriage, with a further 40 sailors marching behind the vehicle acting as brakes. 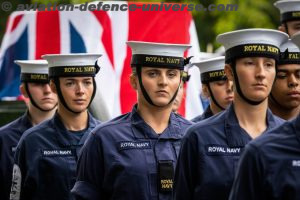 They formed the core of more than 1,000 Royal Navy personnel in the capital for the funeral including the Bands of HM Royal Marines, marching contingents of sailors and Royal Marines, musicians, stewards and personnel lining the route alongside colleagues from the Army and Royal Air Force.

Seventy years ago, the grandfather of Able Seaman Murray Kerr, a seaman specialist undergoing training, was a street liner on The Mall for the Coronation of the Queen while serving in the Scots Guards. On Monday, 20-year-old Murray, from Ayr, repeated that duty at her funeral.

“I’m the third generation in my family in the Public Services – my grandfather as a National Serviceman, my father in the Fire Service, and now me in the Royal Navy,” the Scotsman said.

“My grandfather was there at the beginning of the Queen’s reign – I always thought it was an amazing thing to have done and tell people about – and I find there’s a strong symmetry being there at the end. It’s one of the biggest moments of not just this century so far but the last century too.

“I will now have the same sense of pride he did and I can tell my grandchildren like he did and inspire them to go and do similar things.”

Since Friday, Royal Navy ships, units and establishments around the world  paid their respects to Her Majesty with gun salutes both at sea and ashore, and lowering flags to half mast. And personnel were activated almost immediately to prepare for ceremonial duties surrounding the State Funeral. 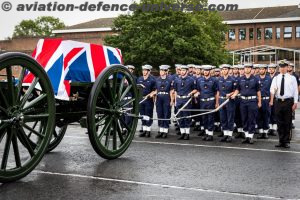 They were drawn from the Royal Navy’s air stations at Culdrose and Yeovilton, HM Naval Base Portsmouth, Clyde and Devonport, HMS Raleigh in Torpoint, submarine HMS Vengeance and frigate HMS Iron Duke. They  converged on HMS Collingwood in Fareham to practise drill, marching and above all pulling the gun carriage which is being used for only the seventh time.

They were drilled by 30 experienced instructors, each with at least 15 years’ knowledge under their belt, led by Warrant Officer 1 Darren ‘Eddie’ Wearing, the State Ceremonial Training Officer, who has worked with the team for 13 years and headed it for the past seven.

“The important bit is getting the workforce into dedicated groups in support of specific roles and ensure we look immaculate,” he said.

“With a few days until the funeral, we’re so far so good with getting people ready. I feel confident and I know for a fact we will put on an exceptional funeral service for Her Majesty the Queen.”

Captain Catherine Jordan, the Commanding Officer of HMS Collingwood,  lead the sailors hauling the Queen’s coffin as the Officer Commanding Gun Carriage, with Commander Steve Elliott serving as her deputy. It was the final duty in uniform for the latter after 32 years’ service.

He was Captain of the Queen’s Guard at the Royal Palaces in 2017 and also met the Queen and Duke of Edinburgh when they visited HMS Lancaster back in 2003. “This is a ‘no-fail game’. The Royal Navy has prepared for this sad event for several years. We are united and focused,” he said. 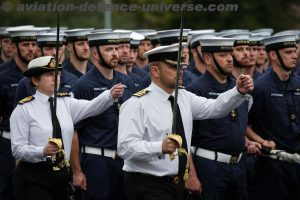 “It will feel emotional, but I know we will be stoic and strong and give Her Majesty the send-off the country expects us to deliver. I think it will be a ‘sad highlight’ for all of our careers – 17- and 18-year-olds just beginning their careers to people like me coming to the end of many years’ service. It is something you will tell your grandchildren about, a piece of history, and something to be proud of, ” he said.

The gun carriage which he  walked in front of – last used for the funeral of Lord Mountbatten in 1979, is kept in environmentally-controlled conditions at HMS Excellent on Whale Island in Portsmouth, where it is cared for under the direction of Lieutenant Commander Paul ‘Ronnie’ Barker.

He checks the state of the carriage every couple of days, maintaining it for use at 24 hours’ notice. “Lots of love and care go into the carriage – looking after it is a great honour, as is preparing it for the funeral. It’s a fabulous piece of the Navy’s – and country’s – history,” he said. “This is a one-off occasion, something none of us will experience again and it is a great privilege to be involved.”

The Royal Navy’s involvement in Operation Bridge, the military’s response to the death of the monarch, is overseen by Rear Admiral Jude Terry, Director People and Training. She’s been impressed by how smoothly the many different personnel – different ranks, different branches, with different skills and background – have come together from the four corners of the UK to support activities surrounding the funeral.

“This is the Royal Navy’s opportunity to say ‘thank you’ for her dedication and her service,” she said. “Everyone involved is working as one – not just those directly involved in the ceremony, but logisticians, planners, chefs, transport experts, all working together to ensure everything falls into place precisely.” 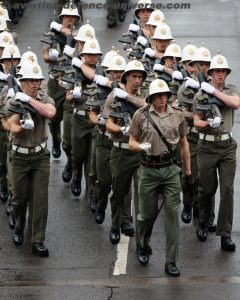 Stephen Prince, head of the Naval Historical Branch – the Service’s official historians – stressed the importance of the Royal Navy in both the Queen’s personal and professional life. “Her Majesty the Queen was the daughter of a naval officer, she married one and two of her children had very long naval careers,” he explained.

“Her first big naval event as Her Majesty was the Fleet Review in 1953 and her last major contact with the navy was in 2021 when she went on board HMS Queen Elizabeth and met a cross section of the crew. “There are really strong links between the Royal Navy and the Royal Family so everyone involved will be proud. The navy is proud of its role in the funeral.

“All the Armed Forces have very strong associations with the Royal Family. This is the Royal Navy’s opportunity to say ‘thank you’ for her dedication and her service. Everyone involved is working as one – not just those directly involved in the ceremony, but logisticians, planners, chefs, transport experts, all working together to ensure everything falls into place precisely, ” said Rear Admiral Jude Terry, Director People and Training. 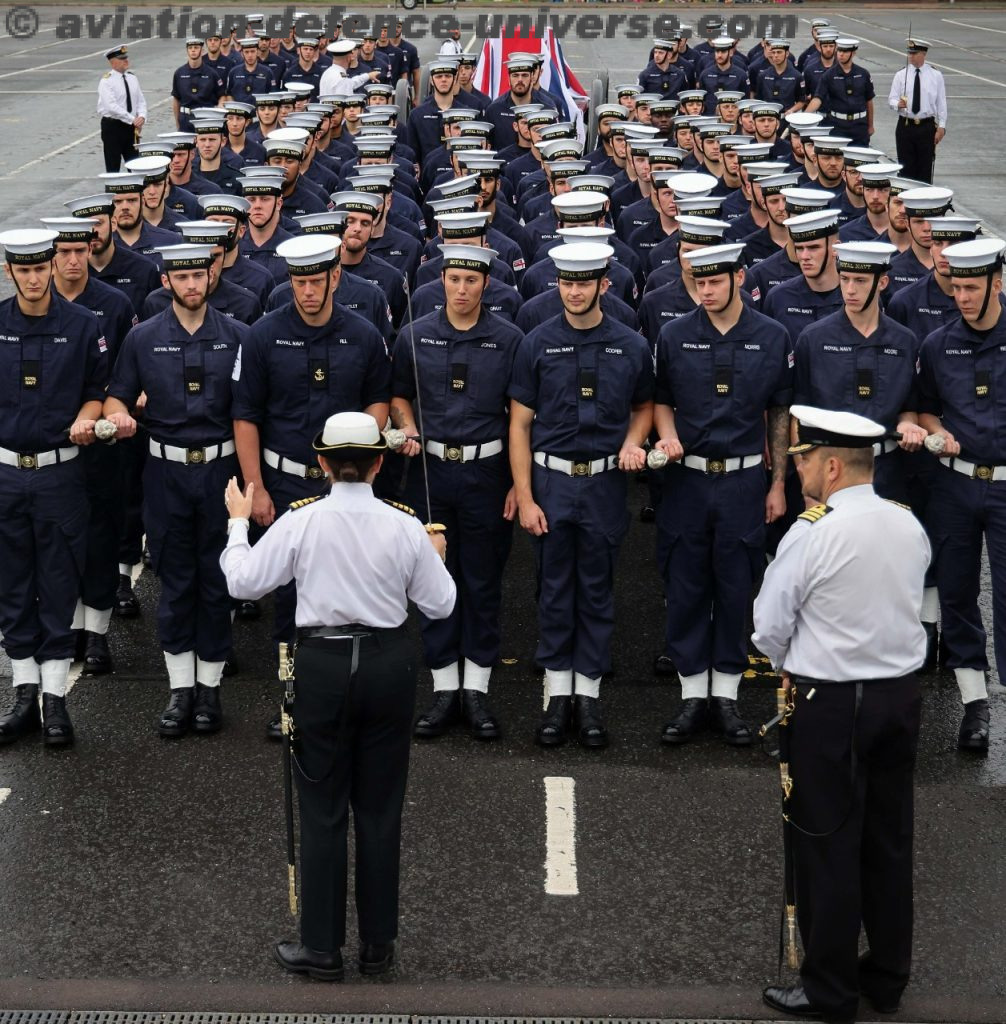