A frigate fit for a Queen: HMS Lancaster and her unique bond with Her Majesty 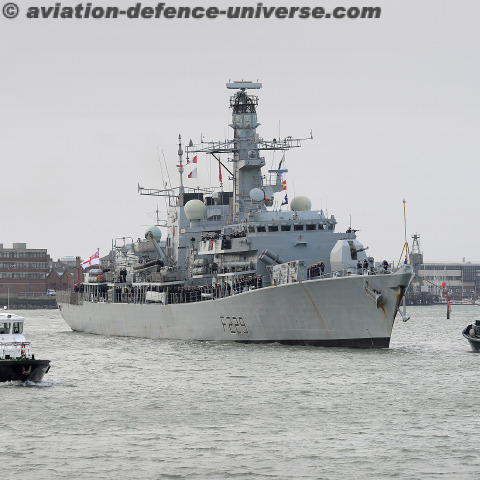 17 September 2022. Most people – understandably – will associate the ship which carries her name around the world with Her Majesty. But there’s a second, much-loved, well-travelled Royal Navy warship in service also named after the Queen– and equally proud of its Royal associations as the aircraft carrier HMS Queen Elizabeth.

HMS Lancaster takes her name after British nobility, in her case the Duke of Lancaster – an historic title held by the monarch since the early 15th Century.

From the day the latest HMS Lancaster was launched by Her Majesty (accompanied by the Duke of Edinburgh) at the Yarrow yard in Scotstoun on the Clyde – to this summer, when crew lined up on Lancaster’s flight deck, and spelt out ‘E II R 70’ in celebration of the Jubilee – the association between the frigate and her Royal sponsor have been cherished.

At Lancaster’s launch, the Queen hoped she would see the new warship into “peaceful and graceful old age”.

And she did. Since that May day, Her Majesty has paid at least half a dozen visits to the ship which has proudly adopted the nickname ‘The Queen’s Frigate’: most recently in 2014, when the guest of honour posed on the forecastle with the ship’s company for a unique group shot treasured by all in it (as well the Royal Navy photographer who captured it). The frigate’s Operations Officer that day was a Lieutenant Commander Tom Johnson, one of a select group of the 180 men and women aboard invited to dine with the Queen (for the record, fois gras with melba toast fingers, herb-crusted best end of lamb, with a dessert of white chocolate mint mousse, the work of Leading Chef Grant O’Neill) following a family tradition; his dad was the frigate’s weapon engineer officer when the Queen came aboard the ship back in 2004.

Eight years after dining with Her Majesty, Tom Johnson took command of her frigate.

Among the last duties of his predecessor, Commander Will Blackett, was to call on Buckingham Palace to report his time aboard the ship was completed.

And among the very first duties for his successor is to pick up a pen and write a letter of introduction to Her Majesty, while the command team dispatch an annual update on the ship’s deeds and activities – the frigate is currently on NATO duties in Portugal.

“As ‘The Queen’s Frigate’, HMS Lancaster has enjoyed a special relationship with Her Majesty since the ship was personally launched by her in 1990,” said Commander Johnson.

“During one of her many treasured visits to the ship in 2014, I had the honour of sharing a meal with her and was struck by the way in which her presence brought such joy to the ship’s company and their families. I am certain that these fond memories of her visits to HMS Lancaster will endure well beyond the ship.

“Her Majesty embodied a profound sense of duty to her country and my ship’s company and I continue to garner great strength and fortitude from her unsurpassed example,” said Commander Tom Johnson.