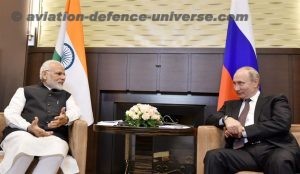 New Delhi. 22 May 2018. After a successful two days informal meeting with Chinese President Xi Jinping at Wuhan from April 27 to 28 Prime Minister Modi had an informal meeting with  Russian President Vladimir Putin at Sochi on May 21, 2018. The informal summit was held on the invitation of President Putin who termed Modi a “big friend”.  The analysts claim that the informal summit is significant as it occurred just two weeks after Putin took oath as president for the fourth time. Not only this at present  the relations of Moscow with Western world have also gone down considerably on several issues including Russian hostility with Ukraine, trouble in Syria, tensions in Afghanistan, Russian interference in US presidential elections and killing of a Russian spy in Britain.

The informal summit was essential as at present the warmth between India and Russia was dwindling. The economic growth of Russia slowed down due to the sanctions imposed by Western countries hence Putin is eager to augment economic cooperation with India away from defence and strategic relations. Russia was also noticing India’s growing closeness with US while India is also worried about Moscow’s expanding relations with Islamabad. Russia has not liked

Joint military exercise between Indian and US troops.

Russia, which is a longstanding, proven and dependable friend, is an important pillar of Indian foreign policy.  Hence this informal meeting was significant in which both the leaders exchanged views on international, national and bilateral issues. Modi thanked Russia for helping India to become member of Shanghai Cooperation Organisation. Russia is also assisting India to become member of Nuclear Suppliers Group and also endorses India’s efforts to become a permanent member of United Nations Security Council.

Both sides also discussed about military cooperation and gave special emphasis on increasing economic cooperation. The impact of Countering America’s Adversaries through Sanctions Act (CAATSA) on Russia and on Indo-Russian defence cooperation was also discussed. CAATSA will impact Indian purchases from Russia especially five S-400 Triumf air defence systems which will approximately cost $4.5 billion. The deal is in last stage of finalization as there is some differences over the price have to be resolved. S-400 Triumf is the long range missile system which India will like to place on India-China border. Besides S-400 missile system Russia is also ready to supply Grigorovich class frigates to India.

Besides international, regional issues were also discussed including impact of US pulling out from the Iran nuclear deal and its impact on Russia and India. The law and order situation in Afghanistan and Syria was also discussed. The increasing threat of terrorism all over the world also figured in the discussions of both the leaders. In view of increasing civil nuclear cooperation between India and Russia both leaders discussed about extending civil nuclear cooperation with other countries also.

Prior to the informal meeting top Indian emissaries including National Security Advisor Ajit Doval and Foreign Secretary Vijay Gokhale visited Moscow and held discussions with their counter parts. Indian Defence Minister Nirmala Sitharaman also paid a three days visit last month. These visits were aimed to fix the agenda of the summit so that the warmth of Indo- Russian relations restored and also to clear the misunderstanding created because of a news-item in Russian paper that India allowed US personnel to visit Russian nuclear-powered submarine which is on lease to Indian navy.

Informal meetings are significant as both the leaders meet without diplomatic formalities, fixed protocol and predetermined agenda. Modi’s informal meeting with Xi Jinping was also a great success as both the leaders met six times with or without delegations in two days. The meeting with Chinese President was necessary as the relations became strained due to 73-days standoff in Doklam.

The summit with Russian president is momentous as it is not the regular annual summit because Modi met Putin in June last year and Russian President is scheduled to visit India this year.

Russia is the principal arms supplier to India although New Delhi bought some military equipment from USA, Israel and even purchased Rafael aircraft from France. According to Stockholm Peace Research Institute, India imported about sixty two percent of its military hardware from Russia in last five years. India is pressing hard to Russia for transfer of technology along with armaments. India which is the third biggest oil importer in the world after US and China is also emphasizing Russia for more participation in gas and oil exploration in the country as Russia has vast reserves of oil and gas. Russia’s Roseneft bought India’s Essar Oil which is largest foreign investment by Russia.

There are vast opportunities of enhancement of bilateral trade between India and Russia which is only $ 11 billion at present however it has potential to increase upto $30 billion by 2025. India can import diamonds, crude oil while India can export engineering goods, fertilizers and agricultural products to Russia.

There are immense possibilities of augmenting military and technical cooperation between both the countries. Indian defence personnel can have courses in Russian defence installations and vice versa. There is enormous possibility of enlarging nuclear cooperation as Russia can construct new power plants and more units can be added in Kundankulam power project.  Russia can export energy to power hungry India.

The Indo-Russian relations became little strained as there was a steep price rise of Admiral Gorshkov and there were also problems in supply of spare parts for Russian armaments but now the trouble is sorted out. Russia also shared sensitive technical details pertaining to nuclear submarine Arihant which indicates especial relationship between both the countries. Russia can supply advanced technology to India in several other important sectors.

India should be careful while developing proximity with US as Russia and China both view it with caution. After the end of cold war the inimitable relationship between India and Russia starting declining because of multifarious reasons including Russian support to Pakistan. Russia lifted the embargo of selling arms and ammunition to Pakistan and both countries conducted joint military exercise and Russia started exporting arms to Pakistan but it will not continue for long as diverse Islamic terrorist outfits are operating with or without connivance of Pakistan government and Russia is afraid of spread of terrorism in its Muslim populated areas.

Indian policy planners should also assess that relations between Russia and China are also improved and at present China is biggest importer of Russian defence equipments. Russia and China together can counteract US and West European countries. Russia gives precedence to Western Europe in comparison to India. Russia supports China’s ambitious Belt and Road Initiative (B&RI) while India is opposed to it.

Russia also contracted about the manufacture of KA-226T helicopters at Hindustan Aeronautics Limited (HAL) plant at Tumakuru in Karnatka. Russia also accepted to develop smart cities in Andhra Pradesh and Haryana. There are also several agreements between Russia and India in diverse fields including engineering, education & training, infrastructure, railways, science and technology etc.

India is also worried about the aggressive approach of US towards Iran as India intends to use Iran’s Chabahar port for strategic purposes and pledged to invest $500 million. US President Trump’s policy of “America first” is also harming Indian and Chinese firms hence India also wants to inculcate friendly relations with Russia and China. India has close trade relations with Iran and Russia and at present both are facing American sanctions. India is one of the biggest purchaser of Iranian crude oil. In view of fast changing international relations Prime Minister Modi’s informal visits in China and Russia are important although complete details of the meetings have not come in public domain so far.

8th March in history
View All
Did You Know This?

8th March in history
View All
Battle Ground COVID 19
Did You Know This?