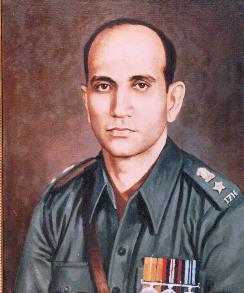 New Delhi. Lieutenant Colonel Ardeshir Burzorji Tarapore, PVC (born on August 19, 1923 in Mumbai, was a senior officer in the Indian Army. He belonged to the family of General Ratanjiba. General Ratanjiba led the army of Shivaji and was awarded 100 villages of which Tarapore was the main village. The name Tarapore comes from that village. Later his grandfather relocated to Hyderabad and started working under the Excise Department of Nizam of Hyderabad. After his death Ardeshir took up his father’s job and was comparatively successful. He was an ace tank commander like General Montgomery and was greatly loved by the men who served under him.

Ardeshir was quite young when he saved his sister, Yadgar, from the family cow that had broken loose. When he was seven years old he was sent to the Sardar Dastur Boys’ Boarding School in Pune. He completed his matriculation in 1940. After school he applied to the army and was selected. He did his initial training in the Officers’ Training School Golconda and on completion was sent to Bangalore.

Popularly known as “Adi”, Ardeshir Tarapore was unhappy joining the infantry, as he wanted to join an armored regiment. On one fine day, his battalion was inspected by Major General El Edroos, the Commander-in-Chief of the state forces. At the grenade throwing range, due to an accident, a grenade fell into the bay area. Adi was quick to pick it up and throw it. However, the grenade exploded which left him injured as the flying shrapnel hit his chest. Major General Edroos was a witness to this event. He was impressed by the exemplary courage displayed by Ardeshir. Major General Edroos summoned Ardeshir to his office and congratulated him for his efforts. Ardeshir took the opportunity to request a transfer to an armored regiment. The General agreed, and Ardeshir was transferred to the 1st Hyderabad Imperial Service Lancers. Interestingly, 1st Hyderabad Lancers fought with The Poona Horse in Operation Polo.

He also saw active service in West Asia during World War II during this part of his career. Hyderabad later merged with the Union of India, and eventually amalgamated the Indian Army. Ardeshir was shifted to The Poona Horse and was commissioned in Poona Horse on 1 April 1951. He rose to become Commanding Officer (CO) and commanded his own regiment in the Poona Horse in the 1965 war against Pakistan. While leading his regiment in securing a major objective in Pakistan, Lieutenant Colonel Tarapore during the Indo-Pakistani War of 1965. He was awarded Param Vir Chakra for his action in the battle.

He joined the army as an officer, and glory touched his feet when some of the fiercest tank battles were fought in the history of war between India and Pakistan, in 1965. He got martyrdom and was awarded the Param Vir Chakra.
On 11 September 1965, the Poona Horse Regiment, under the command of Lieutenant Colonel Tarapore, was assigned the task of delivering the main armoured thrust for capturing Phillora in the Sialkot Sector in Pakistan. During the mission, his regiment suddenly came under surprise attack.

Lt Col Tarapore defied the enemy’s charge, and gallantly attacked Phillora with his battalion, even under continuous enemy shelling. He got wounded, but refused to be evacuated. On 14 September 1965, his regiment captured Wazirali, and by 16th, they captured Jassoran and Butur-Dograndi. The enemy lost around 60 tanks in the battle, but Lt. Col Tarapore was mortally wounded in the action.

CITATION
LIEUTENANT COLONEL A.B TARAPORE
POONA HORSE (17 HORSE) (IC-5565)
On 11 September 1965, the Poona Horse Regiment under the command of Lieutenant Colonel Ardeshir Burzarji Tarapore was assigned the task of delivering the main armored thrust for capturing Phillora in the Sialkot Sector in Pakistan. As a preliminary to making a surprise attack on Phillora from the rear, the regiment was thrusting between Phillora and Chawinda when it was suddenly counter attacked by the enemy’s heavy Armour from Wazirali. Lieutenant Colonel A. B. Tarapore who was then at the head of his regiment, defied the enemy’s charge, held his ground and gallantly attacked Philloira with one of his squadrons supported by an infantry battalion. Though under continuous enemy tank and artillery fire, Lieutenant Colonel A B Tarapore remained unperturbed throughout this action and when wounded refused to be evacuated.

Inspired by his leadership, the regiment fiercely attacked the enemy heavy armor destroying approximately 60 enemy tanks at a cost of only 9 tank casualties, and when Lieutenant Colonel A. B Tarapore was mortally wounded the regiment continue to defy the enemy.

On 11 September 1965, the 17 Horse regiment launched attack on Phillora in the Sialkot sector at the Battle of Chawinda. The southern thrust of the attack, commanded by Lt. Col. Tarapore advanced on the right flank. Between Phillora and Chawinda, the attack met with the Pakistani Army‘s heavy armour charge from Wazirwali. Lt. Col. Tarapore held his ground and gallantly attacked Phillora under continuous enemy tank and artillery fire. When wounded, he refused to be evacuated. He led his regiment to capture Wazirwali on 14 September, and Jassoran and Butur-Dograndi on 16 September 1965. Though his own tank was hit several times, he maintained his pivots at both these places and thereby helped the supporting infantry attacking Chawinda. Inspired by his leadership, the regiment fiercely attacked the enemy armor and destroyed approximately sixty Pakistani Army tanks, suffering only nine tank casualties. However, Lt. Colonel Tarapore’s tank was hit and was enveloped in flames and he died a hero’s death.

The valor displayed by Lieutenant Colonel A.B. Tarapore in this heroic action, which lasted six days, was in keeping with the highest traditions of the Indian Army.

Published in 1965 War remembered and Salute To Soldiers