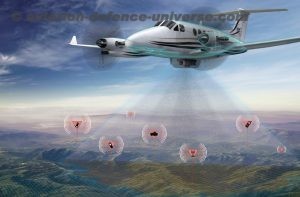 Farnborough. 14 July 2018. Leonardo, which is exhibiting at the Farnborough Air Show 2018 (16- 20th July), will unveil a new Electronic Warfare (EW) communications intelligence (COMINT) product, called ‘Spider’ for the eight Radio Frequency (RF) antennas contained within the system. Spider is able to intercept and analyse enemy communications in real time. This gives commanders the ability to monitor hostile forces’ intent and location utilising Spider’s built-in geolocation technology. By automatically detecting and tracking targets, Spider can present operators with an in-depth picture of the activities of hostile forces.

This new product will be on show at Leonardo’s stand (L1). Trials of Spider have been conducted in 2018 and first deliveries will be available from 2019. Spider has been developed to provide high-end COMINT features at a significantly reduced cost compared to competing systems. Designed and manufactured in the UK, Spider is readily exportable. The Spider antenna array weighs less than 20kg fitting inside a 1.5 x 0.5 x 0.5m pod, allowing it to be installed on a range of platforms including surveillance aircraft such as the King Air 350, Medium Altitude Long-Endurance (MALE) remotely-piloted air systems and larger aircraft such as Leonardo’s ATR-72MP. Spider has been designed for simple integration in an underbelly pod configuration and is supplied factory-calibrated and ready to install on the host aircraft.

Spider can be combined with Leonardo’s SAGE Electronic Surveillance Measures/electronic intelligence (ESM/ELINT) system to provide full signals intelligence (SIGINT) capability through a single mission interface. COMINT and ELINT data will be provided to the crew through a single graphical user interface which allows mission commander overview or dedicated COMINT and ELINT analysis. Leonardo is Europe’s number one provider of airborne electronic warfare systems and is the lead for the EuroDASS consortium, providing the integrated defensive aids suite for the Eurofighter Typhoon. Leonardo also provides the defensive aides suite for the UK Armed Forces AW159 Wildcat, Puma, Chinook and Apache AH-64D as well as export customers’ helicopters.

The Company was recently selected to provide a sovereign defensive aids suite for the UK’s new Apache AH-64E helicopters. With its breakthrough BriteCloud product family, Leonardo is the only company to offer a proven DRFM expendable active decoy. BriteCloud is in service with the UK Royal Air Force. Leonardo’s expertise in the domain allows it to offer a comprehensive Electronic Warfare Operational Support (EWOS) facility to customers, boosting the effectiveness of their EW capability.