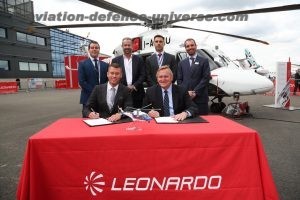 Farnborough .18 July 2018. Leonardo is pleased to announce that Magpas Air Ambulance has selected the AW169 as its new generation helicopter. Specialist Aviation Services (SAS) will customise the aircraft with an advanced medical interior and will operate the helicopter on behalf of Magpas Air Ambulance, providing pilots and maintenance services. The announcement was made during the Farnborough International Airshow. Magpas Air Ambulance, a leading HEMS provider and the oldest emergency medical charity of its kind in the UK, operates 24/7 throughout the year and is fundraising to put its AW169 into service in the spring of 2019. Magpas Air Ambulance selected the AW169 for its class leading characteristics and an unrivalled medical interior enabling 360º patient access, which will deliver increased mission effectiveness in its daily life-saving duties.

Daryl Brown, CEO, Magpas Air Ambulance said “We are delighted to be working with Leonardo and Specialist Aviation Services (SAS) towards the delivery of a new AW169, to replace our current aircraft in the spring of 2019. The current Magpas Air Ambulance MD 902 Explorer entered service 17 years ago and has been with Magpas Air Ambulance since June 2012. Whilst the current model has flown to thousands of patients over the last six years and has helped the charity respond to its highest number of activations ever, in 2017; it is now coming to the end of its operational life. Following intensive research, Magpas selected a (AW169) helicopter, with the most advanced aviation technology, to become the new Magpas Air Ambulance.

We recently launched a two-year appeal to raise £1.5 million and bring this new state of the art AW169 helicopter to the East of England and beyond. The new aircraft will be able to fly further, faster and allow the lifesaving service to reach an even greater number of patients.” Henk Schaeken, Managing Director, Specialist Aviation Services (SAS) said “Magpas Air Ambulance is a key provider of emergency medical response in the East of England and we are delighted to maintain our close working relationship with them as they launch the extra live-saving capability which the AW169 is proving it can deliver.”

SAS has placed orders for 12 AW169s and is also an Authorized Service Centre for the AW169 in the UK, providing a range of support and maintenance services to AW169 customers. SAS has also recently been appointed as an Authorised Service Centre for the AW139 to support the growing number of customers in the UK that are operating the type. Expanding the level of customer service worldwide is part of Leonardo’s commitment indicated in the Industrial Plan launched earlier this year.

A versatile, new generation twin engine light intermediate category helicopter, the 4.8 tonne AW169 has been designed in response to the growing market demand for an aircraft that delivers high performance, meets all the latest safety standards and has multi-role capabilities. The AW169 incorporates several new technology features in the rotor system, engines, avionics, transmission and electric power generation and distribution systems. It is the first all new helicopter in its weight class in more than 30 years and has become the best-selling helicopter in it class for a wide range of applications including air ambulance, corporate/VIP transport, offshore transport and law enforcement. Over 180 AW169s are on order with nearly 60 in service worldwide.