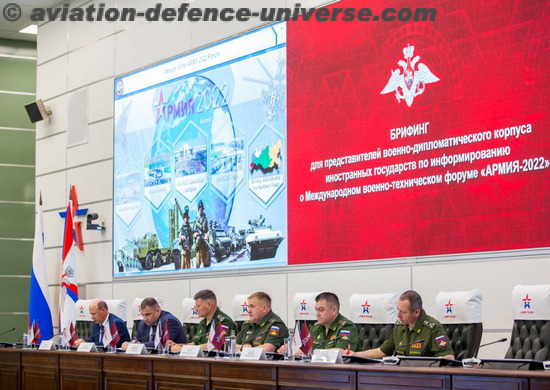 Moscow. 13 August 2022. A briefing on the International Military-Technical Forum ARMY 2022 was held recently at the Patriot congress and exhibition centre for representatives of the military and diplomatic corps of foreign states.

This year, it was the first meeting for foreign military attaches authorised in the Russian Federation. The main objectives of the event are to involve delegations and companies from foreign countries to ARMY 2022 forum and to inform foreign partners about the its events.

The briefing has been attended by over 70 military diplomatic officials authorised in the Russian Federation from 40 countries.

Chief of the Main Directorate of Innovative Development of the Ministry of Defence of the Russian Federation Major General Aleksandr Osadchuk informed about the peculiarities of this forum and answered the questions of foreign visitors.

A cultural and sightseeing programme was also organised for representatives of the military diplomatic corps at the Patriot park. In particular, the foreign guests visited the museum expositions of the local Technical Centre, that has already become popular not only among amateurs, but also among recognised experts in the field of tank building and development of armoured forces.

This year, the forum is to be attended by official delegations and industrial enterprises from 129 foreign countries.

As of June 29, 2022, 42 countries have confirmed the participation of their delegations in the forum. Seven countries have expressed their intention to form national expositions.

The forum is an international venue for negotiations, meetings of heads of foreign defence establishments with the senior staff of Russian Defence Ministry, representatives of executive authorities of Russia and national defence industrial complex.

Foreign partners take an active part in the static, dynamic and scientific-business programmes of the forum.

The International Military-Technical Forum ARMY 2022 will be held

between August 15 and 21, simultaneously with the International Army Games and the X Moscow Conference on International Security that allows visitors and participants of the forum to organise their work with maximum efficiency.

The forum will be held in Patriot congress and exhibition centre, at Kubinka airfield, Alabino training ground, as well as in all the military districts and in the Northern Fleet.

The representative of the organiser by the Main Directorate of Innovative Development of the Ministry of Defence of the Russian Federation.