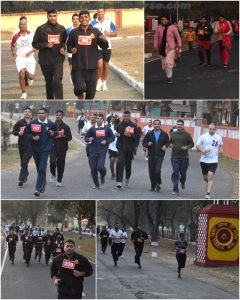 Army Day is commemorated on 15 Jan every year, in recognition of Field Marshal Kodandera M. Cariappa’s taking over as the first Indian Commander-in-Chief of the Indian Army. The Army Day also marks a day to salute the valiant soldiers who sacrificed their lives to protect the country and its citizens.

To commemorate, a solemn wreath laying ceremony was organised at War Memorial, Kamptee. A wreath on behalf of all ranks of UM & G Sub Area was laid at the memorial by Brig Samir Varma, Station Commander, Kamptee.

Further as a commemoration of the Army Day 2023, HQ UM & G Sub Area organised a ‘Mini Marathon’ and ‘Run for Fun’ event. The event which was flagged off from the historical Albert Ekka Stadium witnessed widespread participation from serving personnel, their families and also from school students