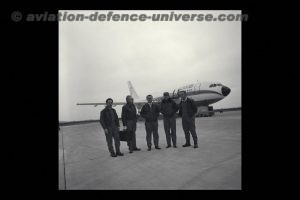 A native from Duisburg, Germany, Günter Scherer had devoted his whole life to aviation and flight test. After graduating from RWTH Aachen with a degree in engineering he started his career in 1961 at what was VFW in Bremen at the time. In 1962, Günter Scherer was called onto the joint Franco-German military transport aircraft Transall. As such, he was one of the very first German flight test members to be graduated from the French flight test school EPNER (Ecole du Personnel Navigant d’Essais et de Réception) in 1961.

A convinced European, who believed in European cooperation as key for a successful aerospace industry in Europe, Günter Scherer joined the SNIAS French Aerospace Company, where he participated to the preliminary work for the Airbus aircraft flight tests. He was flight test engineer in the first ever Airbus flight on Oct 28, 1972 when the A300 took off.

In 1977, this allowed to establish the first integrated multinational flight test team, continuing the European integration which he strongly believed in. He was instrumental in the development and flight test of the A300, A310 and subsequently the first Fly by Wire controlled A320. He ended his career in February 1997.

During all his years at Airbus, Günter had been much appreciated by all his colleagues, who valued his human gentleness, directness and respect for others. Günter Scherer will be remembered by the Airbus community as a man of great integrity and a source of inspiration.

“Günter was a pioneer of Airbus, a strong advocate of Franco-German and European cooperation in our industry. He was thus a solid rock in the foundation of Airbus and will be long remembered,” said Tom Enders, CEO of Airbus.