New Delhi. Flying Officer Nirmal Jit Singh Sekhon, PVC (17 July 1945 – 14 December 1971), an officer of the Indian Air Force,  was posthumously awarded the Param Vir Chakra, India’s highest military decoration, in recognition of his lone defence of Srinagar Air Base against a PAF air raid during the Indo-Pakistani War of 1971. He is the only member of the Indian Air Force to be so honoured.
Nirmal Jit Singh Sekhon was born on 17 July 1945 in the village of ISEWAL DAKHA in Ludhiana District, Punjab. He was the son of M.W.O. (Honorary) Flight Lieutenant Tarlok Singh Sekhon. He was commissioned into the Indian Air Force on 4 June 1967 as a Pilot Officer.
During the Indo-Pakistani War of 1971, he was serving with the No. 18 Squadron, “The Flying Bullets” of IAF, flying the Folland Gnat fighter aircraft based at Srinagar. On 14 December 1971, Srinagar airfield was attacked by six Pakistan Air Force F-86 jets of 26 Sqn from PAF base Peshawar. Flying Officer Sekhon was on readiness duty at that time. As soon as the first aircraft attacked, Sekhon rolled for take-off as No 2 in a two-Gnat formation, with Flt Lt Ghumman in lead, just as the first bombs were falling on the runway. Only delayed due to dust kicked up by the preceding Gnat, Sekhon lost no time in singling out the first Sabre pair, which was re-forming after the bombing run. The Gnat Leader, Flt Lt Ghuman, lost visual with his wingman just after take-off, remained out of the fight leaving Sekhon to handle the muddle all by himself. In the ensuing air battle, Sekhon scored a direct hit on one Sabre and set another ablaze.  The latter was seen heading away towards Rajauri, trailing smoke.
Sekhon, after being hit, was advised to return to the base. He is said to have flown in straight, wings level for some time, then going inverted, plummeting down, probably due failure of control system. He attempted a last-minute ejection, which did not prove successful, as his canopy was seen to fly off. The wreckage of the Gnat was found in a gorge, near the road coming from Srinagar town to the base, a few miles from the base. Despite many search efforts by Army and Air Force, his corpse was never found due to the mountainous terrain of where his fighter went down, much to the disappointment of his wife and family.
The bravery, flying skill and determination displayed by Flying Officer Sekhon, against odds of 1:6, earned him India’s highest wartime medal for gallantry, the Param Vir Chakra.
Nirmal Jit Singh Sekhon is remembered for his gallantry and statues of him have also been erected in many cities in Punjab. A marine tanker built in 1985 was named Flying Officer Nirmal Jit Singh Sekhon, PVC. A statue in tribute of Nirmal Jit Singh Sekhon was erected at the district court of Ludhiana (very fitst time it was at Samrala Chowk,Ludhiana) in the courtyard next to the flag pole. A decommissioned Folland Gnat fighter is part of the memorial and serves as a gate guardian.
Flying Officer Nirmaljit Singh Sekhon was only 28 years when he made the supreme sacrifice  for the nation and is the only Air Force Pilot to have received Param Veer Chakra. 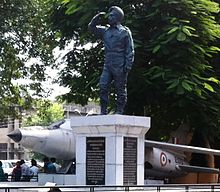 FG OFFR NIRMAL JIT SINGH SEKHON
18 SQUADRON 10877 F(P)
Flying Officer Nirmal Jit Singh Sekhon was a pilot of a Gnat detachment based at Srinagar for the air defence of the valley against Pakistani air attacks. From the very outbreak of the hostilities he and his colleagues fought successive waves of intruding Pakistani aircraft with valour and determination, maintaining the high reputation of the Gnat aircraft. On 14 December 1971, Srinagar airfield was attacked by a wave of enemy Sabre aircraft. Flying Officer Sekhon was on readiness duty at the time. Immediately, however, no fewer than six enemy aircraft were overhead, and they began bombing and strafing the airfield. In spite of the mortal danger of attempting to take off during the attack, Flying Officer Sekhon took off and immediately engaged a pair of the attacking Sabres. In the fight that ensued, he secured hits on one aircraft and damaged another. By this time the other Sabre aircraft came to the aid of their hard-pressed companions and Flying Officer Sekhon’s Gnat was again outnumbered, this time by four to one.
Even though alone, Flying Officer Sekhon engaged the enemy in an unequal combat. In the fight that followed, at treetop height, he almost held his own, but was eventually overcome by the sheer weight of numbers. His aircraft was shot down by a gunfire of one of the Sabres and he was killed.
The sublime heroism, supreme gallantry, flying skill and determination above and beyond the call of duty displayed by Flying Officer Sekhon in the face of certain death have set new heights in Air Force traditions. Aviation & Defence Universe salutes Flying Officer Nirmaljit Singh Sekhon for his valour and selfless service and the motherland for producing such a son.
Share this on WhatsApp