Turkey  submerges A300  In Aegean Sea  for tourism 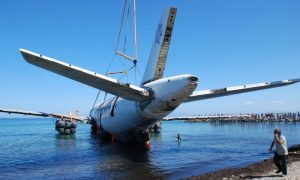 Ankara, Turkey.  06 June 2016. An Airbus A300 has been submerged in the Aegean Sea  off the coast of Kusadasi. The 54m aircraft was divided into parts and taken by truck to the seaside resort town in western Turkey. Divers and cranes then lowered the 36-year-old plane into the sea, as people and passing ships stopped to watch.

Two-and-a-half hours later, the plane was 75ft underneath the surface, where it is hoped it will lure tourists. The plane, which is reportedly the biggest plane ever used as a reef, cost 270,000 Turkish Lira, is 54 meters long and 44 meters wide. “We expect some 250,000 domestic and foreign tourists per year to come here for diving,” said Aydın Metropolitan Mayor Özlem Çerçioğlu.