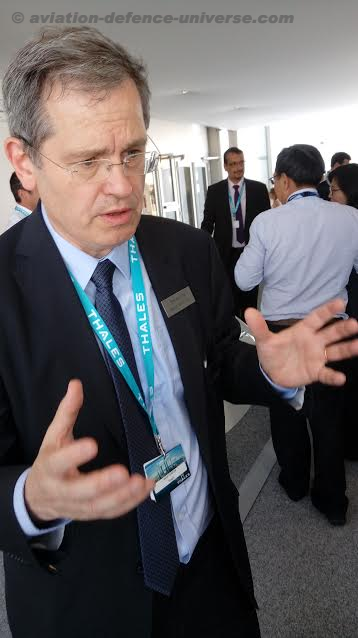 Le Bourget. 22 June 2017. The Thales simulation and training session started with a presentation about the comprehensive virtual reality system known as RealityH. This system had been created and developed with the specific intention to test, train and check pilots and crews in advance on their teamwork and tactical capabilities in the field, and ended with an opportunity to take the virtual helicopter for a spin.
The virtual reality system at first glance seems rather simple, a white seat with two pedals, a flight stick and a lever, characteristics reminiscent of a helicopter, while the VR headset was not only linked to a machine but to a screen as well, displaying the view within this alternate world. The hardware itself, in terms of tech and accessibility, is rather simple and easy to access, but had been programmed to contain all the necessary funtions for full and efficient training.
“RealityH is quite a comprehensive system,” we are told, and “the great advantage is to be able to connect two trainers and the flight simulators.” As a system it holds the capacity to connect pilots, crews and instructors from across the globe to train within one system, thus providing access to collective training and a higher level of professionalism. Each crew can be fully monitored throughout their training and directed to being ready for the field beforehand. The established system exercises personnel in all environemnts, in different types of weather, as well as during the day and at night. The opponents provided though are not just climate related; pilots and crews are brought into the full flight simulator to face adverse forces in varying quantities, AI brought to life by a generator.
The most important facet of the virtual reality simulation is that it allows for crews to practice together and develop working tactics and solutions to arising circumstances. RealityH is therefore a “high level training solution for the military.” Such a system could also be used to train pilots across the rules of civil aviation, but so far is focused on military training for pilots and crews, with aims of coming up with diverse tactics, enhancing teamwork, and discovering methods to face sudden or surprise situations. As such, this CGF device devoted to armed forces.
The simulation training is gradual, and is split over a couple of stages. The initial training commences purely with piloting and handling of the simulated vehicle. Once the crew has passed this section, the second stage begins which consists of the military collective training and the tactics oriented training, for both combat and operations, and as such for all military missions. The simulation itself is not designed to test new products or equipment though, its focus is solely on the development of the necessary skills required to survive in the field. Whether for coordination, tactics, teamwork, or gadget and equipment proficiency, the simulation allows to gain levels of expertise that would be difficult to implement in real-time training. The RealityH can then be seen as a cost efficient and effective way to challenge and test crews. Useful for developing new and creative tactics to use aircraft collectively, and in better ways, this modular simulator is under a constant process of development. With every new mission system of aircraft, the simulation has to be adapted and must evolve “in accordance with the system being graded”. The current configuration is considered to be specific to the current solution, and so for a target market, but the basic product is one that is being developed and used by other nations. Such products always face changes, to the way the training is and behaves, and from such a basic existing product comes the capacity to establish new capabilities, which in turn are always coming up. For example, a new artificial intelligence module is in process of development, one that will be and react more realistically in the complexity of the situation that the crew is facing; “many modules are in works,” and there is a constant investment to keep a system that is moving up-to-date. “The company needs to keep up and move as well”.
Share this on WhatsApp