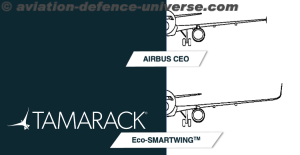 Dubai, UAE . 06 December 2022. Tamarack Founder and CEO Nick Guida is having serious and confidential talks with single aisle aircraft manufacturing organizations, carriers, lessors, and service organizations at the Middle East & North Africa Business Aviation Association (MEBAA) show, labelled the Middle East and North Africa’s leading business aviation event running December 6-8, 2022, in Dubai. Some of the several interested OEM’s are based in the MENA region. Others have international operations based in Asia, North America, Europe and elsewhere.

“There has been exceptional interest in Tamarack’s solicitation for manufacturing partnerships now because of aviation’s current increased focus on sustainable flight and Tamarack’s technology is arguably the most dramatic aviation fuel saving and emission reducing technology proven and available right now,” said Guida.

Guida added, “Our Eco-SMARTWINGÔ winglets instantly react to turbulence, smooth flight, allow for enhanced ability for safety and control, while being able to take off in high and hot conditions with higher payloads and reduce noise pollution. Noise pollution is lessened because our upgraded aircraft can use shorter runways and get higher faster, away from airports and population centers.”

Tamarack’s Active Winglet upgrade has been installed on nearly 10% of the Cessna CitationJet fleet and has proven very valuable for charter and many other missions due to the increased range, payload, allowable takeoff weight, and ride smoothing benefits. Tamarack continues to upgrade CitationJets and has upgraded about 180 aircraft with sales expected to continue climbing. Recently, a Cessna M2 GEN2 has been upgraded with the Tamarack winglets and King Air 200 and 350 models have performed outstanding as experimental aircraft being prepared for certification.

As reported last month, Tamarack’s technology has afforded record-setting flights on both Cessna CitationJet and the King Air 350 platforms, setting National Aeronautic Association (NAA) Speed-Over-A-Recognized course records between different city pair routes during non-stop flights. These records have demonstrated the non-stop flight capabilities possible with the Tamarack upgrade, but the more important interest for most commercial operators is fuel savings and safety benefits which are  significant when the city pairs aren’t being chosen to showcase range.

Tamarack’s upgrade for the CitationJet has routinely demonstrated up to 30-percent fuel savings and range increases which is dramatic considering that most traditional winglet upgrades reach approximately 5-percent fuel savings, especially in commercial airline settings.  The Tamarack Eco-SMARTWING upgrade for the A320 is expected to have double digit savings when installed on the narrow body aircraft.

These economic and environmental savings have garnered the attention of single aisle aircraft manufacturing organizations, carriers and lessors, and service organizations.  As reported in a press conference at NBAA BACE in October 2022, Tamarack is actively soliciting business ventures to commercialize the Eco-SMARTWING technology in the commercial aviation sector, and in recent days several organizations have stepped forward with serious interest. The current sales growth and company growth can be attributed  to the quality of service support at Tamarack’s twenty Service Centers and three Transformation Centers worldwide.

Tamarack’s winglets have additionally gained notice and support by aviation committee members of the US Congress and Tamarack is also in talks with the US military, especially because the technology allows such extraordinary increased loiter and range capabilities for military missions.