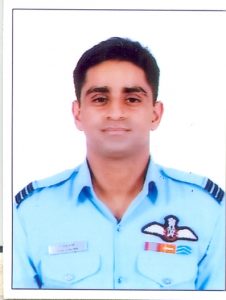 New Delhi.  On 01 Jun 16, Squadron Leader Rijul Sharma was authorised to fly an Air Test sortie on MiG 29 aircraft which involved testing of aircraft at Supersonic Speeds at a height of 10 Km. While conducting this test in Supersonic Flying corridor; 110 km away from base at a speed of 1.1 Mach which corresponds to 1200-1300 Kmph of true air speed, the canopy perspex of the aircraft shattered. This resulted in explosive decompression and perspex pieces hitting the officer on his right shoulder. In the absence of canopy; he was exposed to  extremely low temperatures of minus 28 deg C and very severe wind blast owing to very high speed.

Human exposure to such low temperatures, aero-medical problems of decompression sickness and few seconds to useful consciousness due to Hypoxia required prompt actions on the part of the pilot. Weighing against the option of ejecting and displaying courage of an exceptional order, Sqn Ldr Sharma decided to recover the aircraft.

In the process, he totally disregarded his critical shoulder injury and the discomfort posed by high speed, high altitude and low temperatures. To avoid the effects of aero-medical problems he quickly descended to 3 Km and simultaneously reduced speed for effective control of the aircraft. Displaying concern to other lives and national assets he avoided flying close to oil installations which were enroute and populated areas. Notwithstanding the reduced frontal visibility, very high cockpit noise level and heavy aircraft weight, he skillfully handled the damaged aircraft and executed a safe emergency landing, without any further damage to the aircraft. His actions in handling such a critical emergency, not only saved his own life and the aircraft, but also prevented possible catastrophic damage to en-route strategically important and vital petro­chemical installations and populated areas.