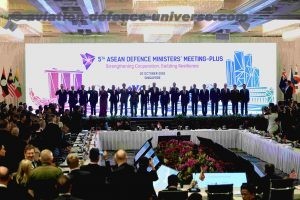 Singapore. 20 October 2018. India has continued to reiterate its stand on terrorism and would not hesitate to take the strongest measures if required, warns Indian Defence Minister Nirmala Sitharaman on Saturday, in a veiled reference to cross-border terrorism from Pakistan.

The 12th ASEAN Defence Ministers Meeting (ADMM) and 5th ADMM-Plus was held on October 19 and 20, 2018 Singapore. ADMM and ADMM-Plus serves as key Ministerial-level platforms in regional security architecture for promoting strategic dialogue and practical cooperation between ASEAN  and its partners. The conferences were attended by defence ministers from India, Australia, China, Japan, New Zealand, South Korea, Russia and US.  India was represented by Defence Minister Nirmala Sitharaman. This was second time Singapore has chaired ADMM since its establishment in 2006 and first time to chair ADMM-Plus since its establishment in 2010. The theme of this year’s dialogue was ‘Strengthening Cooperation, Building Resilience’.

Madam Sitharaman, speaking at a meeting of ASEAN Defence Ministers in Singapore, also said that the presence of terrorist infrastructure and support to terrorists in the “immediate neighbourhood” constantly tested India’s patience and as a responsible power it exercised “great restraint” in dealing with the menace.

“However, India had exhibited measures to disrupt and deter the activities of terrorist groups and their patrons and would not hesitate to do so again if required in future,” she says.

As a major peace-broker in the Asian region, she emphasised India’s concern on the grave challenges to international peace and stability due to the threat of terrorism.

Condemning the use of terror as an instrument to further state policies, she said that the interplay between states and non-state actors used as proxies to foment violence had worsened this menace. 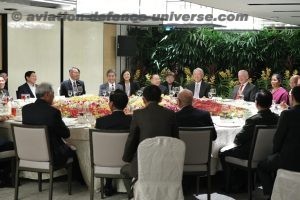 She reiterated India’s view on the Indo-Pacific, as outlined by Prime Minister Narendra Modi, as an open, balanced region, connected by open and secure seas, integrated by balanced trade and shaped by a rules-based order, and anchored in ASEAN centrality.

She also asserted that India was committed to maintaining a sustained focus of its Act East policy in terms of economic, cultural and developmental engagement of the region.

The theme of this year’s dialogue at the 5th ADMM Plus meet in Singapore, which is a forum for Defence Ministers from 10 ASEAN and eight ASEAN Plus countries, was ‘Strengthening Cooperation, Building Resilience’.

The dialogue adopted two resolutions on ‘Countering the Threat of Terrorism’ and ‘Practical Confidence Building Measures’.

Complimenting the ADMM Plus for emerging as a credible and effective platform forging practical cooperation among the members of the armed forces, she informed the partners of India’s active participation in all the ADMM Plus mechanism contributing effectively to their success.

Madam Sitharaman also emphasized India’s commitment to a rules based international order that was inclusive and democratic. She made clear India’s desire to work both bilaterally with ASEAN member states as well as institutionally and welcomed Thailand’s taking over the chairmanship of the ADMM Plus. 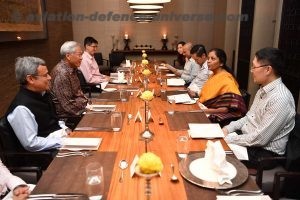 For the record, an Indian naval ship and an army contingent have participated in a large counter-terrorism and maritime security exercise in Singapore involving 18 countries.  The exercise, co-hosted by Singapore Armed Forces (SAF) and Royal Brunei Armed Forces (RBAF), involved about 3,500 personnel, 18 naval vessels, 25 aircraft and 40 Special Forces teams from all 18 ADMM-Plus countries.

India, Australia, China, Japan, South Korea, New Zealand, Russia and the US along with 10 ASEAN member countries makes up ADMM-Plus.

“The operations that the Indian Navy conducts with the Republic of Singapore Navy in its annual bilateral exercises, since the last 22 years, is indicative of the mutual trust and respect that both navies have for each other.”

Singapore’s Defence Minister Dr Ng says: “We are very happy that the ADMM agreed on the guidelines and operational annexes, as well as the Plus partners all agreeing in principle and now are studying the adoption of the guidelines for themselves.”

He also welcomed the issuance of two Joint Statements on Preventing and Countering the Threat of Terrorism and Practical Confidence-Building Measures by the 5th ADMM-Plus. The Joint Statements mark the first time since 2013 that the ADMM-Plus has issued joint outcome documents. 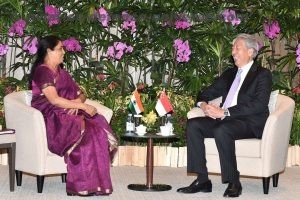 The Joint Statement on Preventing and Countering the Threat of Terrorism reaffirmed ADMM-Plus’ collective commitment to strengthen regional cooperation against this common security threat. In particular, a common information-sharing platform was proposed and supported. The Defence Ministers also agreed to step up practical military-to-military cooperation through the ADMM-Plus Experts’ Working Group on Counter-Terrorism (EWG on CT).

The second Joint Statement on Practical Confidence Building Measures highlighted the importance of ensuring the safety and security of the sea and air lanes which were essential for global commerce. In acknowledging the risks, the Defence Ministers agreed to promote communication, mutual trust and confidence and reduce miscalculations and mishaps in the region.

During the Meeting, Singapore proposed a set of guidelines on air military encounters to promote a safe operating environment. The proposal received unanimous support in-principle; various countries also lent support to the attendant documents on operational procedures. This represented the first such agreement in a multilateral defence establishment. This set of air guidelines, together with previous ADMM-adopted initiatives such as the ASEAN Direct Communications Infrastructure, the ADMM Guidelines for Maritime Interaction, as well as the ADMM-Plus EWG exercises and ADMM-Plus’ agreement to subscribe to the Code for Unplanned Encounters at Sea (CUES), were significant measures to enhance regional peace and stability.

The Defence Ministers also exchanged views on other common security challenges, including the situation in the Korean Peninsula, recent developments in the South China Sea, the proliferation of weapons of mass destruction, and cyber threats. They emphasised the need to enhance mutual trust and confidence, exercise self-restraint in the conduct of activities, avoid actions that may further complicate the situation, and pursue peaceful resolution of disputes in accordance with international law, including the 1982 UN Convention on the Law of the Sea (UNCLOS). In this regard, the Defence Ministers expressed the hope for the good progress and expeditious conclusion of the Code of Conduct in the South China Sea.

The ADMM-Plus further noted that the ASEAN Defence Ministers had agreed on the selection criteria for observers during the 12th ADMM held on 19 October 2018. This initiative provided non-Plus countries with opportunities to contribute expertise and capabilities to the region through the EWGs.

The Defence Ministers also witnessed the ADMM Chairmanship Handover Ceremony from Singapore to Thailand, and expressed full support for the upcoming 13th ADMM and 6th ADMM-Plus in Thailand in 2019.