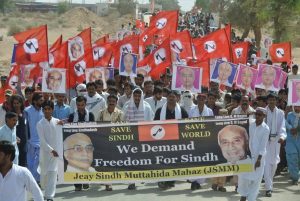 By JK Verma, New Delhi. 28 September 2016. When the simmering voices were heard influenced by the separation of the province of East Pakistan, little would have the Pakistani leadership thought that a movement which began in 1972 with the demand of an independent Sindhudesh like the then newly formed Bangladesh, would keep throwing smoke even four decades on.

Pakistan which is fuelling terrorism in Kashmir is unable to handle diverse secessionist movements in the country. Various nationalities in Pakistan including Pashtun, Baloch, Sindhis, Muhajirs, all are fed up with the ruthless domination of Punjabis. Pashtuns never accepted Durand Line and Afghanistan opposed the creation of Pakistan and Pashtuns want a separate homeland for them. Pashtuns are the biggest ethnic group in Afghanistan and second largest ethnic group in Pakistan after Punjabis.

The inhabitants of Sindh province were never keen to join Pakistan which was carved out from India in 1947 on the demand of educated Muslims of United Province and Bombay Presidency. It is evident by the fact that the residents of Sindh joined the movement very late and that too on the name of Islam.
In the beginning Sindhis opposed the idea of Pakistan and because of this in provincial elections of 1946 All India Muslim League could not win large number of seats.

Residents of Sindh fought thrice with British rulers before 1947 to become independent. Sindhis claim that they are losing their independent identity in Punjabi dominated Pakistan. Sindhi culture and identity is several thousand years old and they would not like to sacrifice it on the name of Islam for 70 years old Pakistan.

Sindhis have genuine grievances against Punjabi dominated Pakistan; they allege that Karachi the biggest city and business centre was illegally taken from Sindh in 1948. Punjabi dominated army and Punjab police regularly harass Sindhis in border areas. Several acres of arable land in Sindh were allotted to Punjabi army and civilian officers with ulterior motive of settling Punjabis in Sindh.

The bureaucracy of Central government, Pakistan defence forces and security agencies are controlled by Punjabis and some posts are given to Pathans also but Sindhis and Balochis are treated as second class citizens and no representation is given to them. Although after great efforts Sindh Regiment was created in Pakistani army but there are less than 1percent Sindhis in Sindh regiment.

Sindh is a mineral rich state and it possess oil and gas, coal, uranium, copper, gold but the Central government and various Multi National Companies are exploiting the mineral wealth of the state without giving due compensation to Sindh.

Punjabis have been wanting to subjugate Sindh hence they are settling non-Sindhis in the state. Large number of Muhajirs, Punjabis, Afghans, Bangladeshi Biharis, Rohangyan Muslims from Myanmar were settled in Sindh to disturb the demographic superiority of Sindhis.

Sindh contributes largest share in the income of Pakistan but the central government spends very little in the progress of province as if they know that Sindh will secede from Pakistan hence much infrastructure should not be developed in the state. There were election frauds on the behest of central government.
Sindhis feel that their interests are not safe in Pakistan hence they want to break away. The demand of separate nationhood is an old demand and can be viewed as the failure of two- nation theory.

Both Jeay Sindh Qaumi Mahaz (JSQM) and Jeay Sindh Muttahida Mahaz (JSMM) fight for an independent Sindhu Desh. JSQM organised a rally in 2012 in Sindh which was attended by hundreds of thousands of persons. JSQM Chairman Bashir Khan told that rallies were held in several places in Sindh and large number of Sindhis who want an independent country participated in these rallies. He also told that Sindhis and Muhajirs both were exploited by Punjabis hence they should unite and fight for an independent country.

Again JSMM another separatist party gave a strike call in January 2014 which resulted in complete closure of the province. The party has a strong following among educated youths and also adopts violent measures including bomb blasts. Security forces abducted the leaders and cadres of JSMM and killed them after sustained interrogation.
There are several other parties like Sindhu Desh Liberation Army (SDLA) which takes inspiration from Balochistan Liberation Army (BLA); Jeay Sindh Muttahida Mahaz (JSMM), Sindh Tarqqi-Pasand Party (STP), Sindh United Party (SUP), Jeay Sindh Mohaz (JSM), Qaumi Awami Tehreek (QAT), Sindh United Party (SUP) and Sindh National Movement Party (SNMA). All these parties want to establish an independent Sindhu Desh. Few of these parties believe in violent activities as Pakistan government would not amend its ways through peaceful means and few parties think that peaceful means would give better results. Peaceful demonstrations and violent activities continue in Sindh but the press is prohibited to cover these incidents.

The secessionist movement of Sindh is quite old and it has lot of support among Sindhis residing in Pakistan as well as abroad. Sindhis are convinced that Punjabis are utilizing Sindh as a colony and exploiting its resources. They believe that progress of Sindh and Sindhis is feasible only if they split from Pakistan.

Unfortunately ISI stooges have penetrated in several Sindhi separatist outfits and they do not agree to any joint agitation peaceful or otherwise. Besides differences among Sindhi outfits Muhajirs and Pathans also oppose formation of Sindhu Desh as they feel that their rights would not be safe in the new country.

Pakistan government must understand that two-nation theory has failed and religion cannot remain a binding force all the time. Now Pakistan should stop sending terrorists to India and instead should try to keep Pakistan intact. Pakistan should also stop blaming India for trouble in Balochistan or in Sindh instead it should stop their exploitation and must give them their due share otherwise that day is not far off when Pakistan is further disintegrated and two or more new nations apply for the membership of United Nations.

Pakistan a terrorist state launched low intensity war against India with the ulterior motive of annexing Kashmir. It pleads that Pakistan was created on the basis of two nation theory and accordingly Muslim majority state of Kashmir should be merged in Pakistan. Nonetheless Pakistan conveniently forgot that partition of Pakistan and creation of Bangladesh itself negates the two- nation theory.